I am writing a raytracer which is meant to support shadows. Previously, I have naively implemented hard shadows by casting a shadow ray towards the light (+ offset) and seeing if it hits anything along the way. This worked great, but now I am challenging myself by adding support for dielectrics and transparency in general.

Intuitively, I wanted to make my shadow rays refract if they hit an object on the way to the light. However, it turns out this is pretty difficult to do. I then found this post which explains that I can just ignore refraction for a good enough approximation. Therefore:

Now, assuming that I do cast a straight shadow ray and beteen a point and the light there is a semi-transparent (50% opaque) purple surface.

"Refracting the shadow ray" is really the wrong mental model to use to think about this. After all, shadow rays are not real things; light rays are. Shadow rays are only used to test for some geometry blocking a light ray that could otherwise be there.

How does the final result change depending on if you refract the shadow ray or not? I am having a hard time trying to visualize it, are there maybe any side by side comparisons?

In general, light from a light source refracting through a transparent object and illuminating a surface will produce caustics, as in this image from Wikipedia: 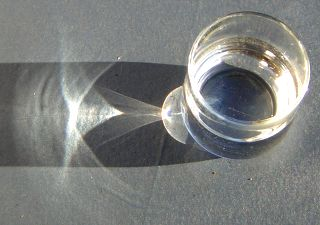 You can see here the ordinary shadow due to interruption of the direct light path from source to the tabletop (this is the same shape as if the glass were opaque), plus a very complex pattern of extra light that's produced where the refraction through water and glass happens to focus more of the incident light rays. All the light that would have filled in the shadowed area if the water glass wasn't there has instead gotten pushed around, removed from some areas and concentrated in others, resulting in this pattern.

is it not possible to solve for the angle you need to shoot in order to end up at the light after refracting many times? Should this not end up being a linear system of equations?

Perhaps in the case of some exceedingly simple geometry, like a point light and a single perfect sphere, this could be done. In general, it is far too complex to handle this way. It certainly is not as simple as some linear equations. After all, look at the complexity of the caustics above, which is the result of essentially two nested cylinders. Really, the way to handle this is with photon mapping, or other advanced path tracing approaches like path guiding or VCM.

Are there any heuristics or rules of thumbs for when you should start actually modelling it in a physically realistic way?

It depends on the scene, and it depends how much realism you want vs how much computational budget you have, as caustics are expensive to simulate. A rule of thumb could be if you have any highly specular (low roughness) surfaces in or near the camera's field of view, and exposed to a small bright light source. Those are the cases where caustics will probably be most visible.

This gets into the interpretation of what your transparent surface is. When you say it is purple, does that mean it applies a purple tint to the light that passes through it? If so, then you should multiply the light color by purple. Or does the surface reflect/scatter purple light? In that case the light that passes through it would actually get a green tint (the complementary color to purple) since it will have its purple component filtered out of it. This is what happens with air on a clear day: it scatters blue light (producing the blue sky) and applies a yellow/orange tint to sunlight passing through it.

BTW, to be more physically accurate, a color tint is not imparted by a surface but by a medium, and it depends on how far the ray travels through the medium. If you want to model tinted but clear (not cloudy) transparent materials, you can look up some material about Beer's Law, which governs that.

I'm guessing that the intensity of the light with initial intensity $i$ would be as follows: after the first surface, it is $\frac{i}{2}$, then $\frac{i}{4}$ and lastly the point sees $\frac{i}{8}$ of the original intensity?

That's right, the attenuation of each layer stacks as you add more layers.

Not the answer you're looking for? Browse other questions tagged raytracing lighting shadow transparency or ask your own question.

5
Refraction in a Ray Tracer: What do with an intersection within the medium?