I am trying to write a ray-tracer. The lighting part is proving to work but not accurately. To debug I simplified the scene to a single sphere centered at the origin with a radius of 1 and a point light shining from above (0, 2, 0). The camera is at (0, 0, 4).

The image I'm rendering seems wrong - should its cutoff be lower closer to the equator of the sphere?

Any help would be appreciated. 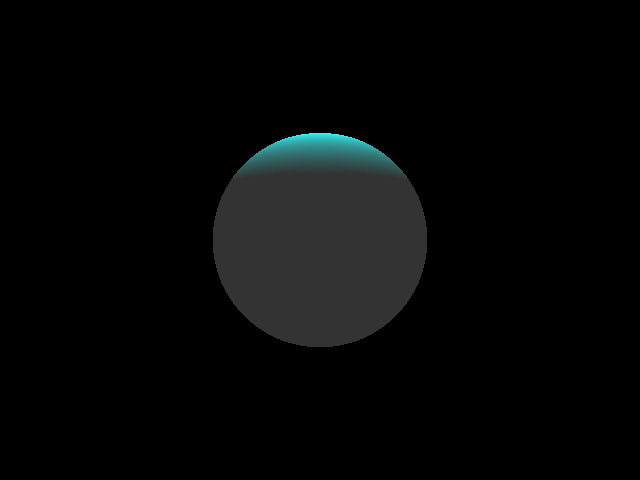 Some elementary trigonometry tells you what to expect from this situation. 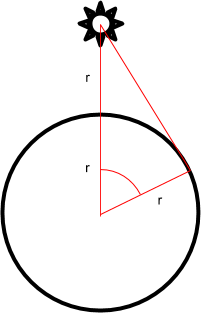 The angle to see the shadow terminator is marked on the diagram, and a use of SOHCAHTOA tells you it's $\cos^{-1}\tfrac{1}{2} = 60^\circ$. Yours looks higher than that so your intuition seems correct. Stepping through the lighting code will help you see where it's going wrong, and you should consider writing unit tests for it, so that it's easier to provoke bugs like this in isolation.

Something else you might try to help narrow down the problem space is replacing the diffuse calculation with 1 iff $L.N > 0$ (i.e. if the light is in front of the surface), 0 o/w. That will give you a sharp line instead of a gradient, and if that sharp line is in the wrong place, you know the input vectors are wrong. If it's in the right place, the problem is in the diffuse shader itself.

Thanks so much for everyone's replies. It really helped to see any reply that kind of encouraged me to continue.

So after some hours of working out the issue it turns out this is correct on the sphere. The above image is correct. As Dan kindly pointed out and as I later drew it out on paper and tried lights of different heights, the higher the light, the lower the cutoff. Because the light was so close to the sphere only its top was intensely illuminated.

The thing I had gotten incorrect were actually the ellipses normal transforms, which I didn't include in the post because I thought it was more complex, get the basics right first. So it turns out I had to create a different stack to store the non-uniform transforms as it was being read from the file so that the ellipses' normals could be transformed correctly.

So lesson learned - understand all the cases before implementing them.

But I really appreciate this platform! Thanks and cheers to all

Not the answer you're looking for? Browse other questions tagged raytracing diffuse or ask your own question.

16
Subpixel Rendering for a Ray Tracer
5
Problem with Basic Diffuse Lighting
3
Skybox in a Ray Tracer
2
How to use my Ray Tracer in 3DS Max
8
Why is the half vector not used in diffuse BRDF Fresnel calculations?
5
Grainy image in my simple ray tracer
2
Weird artifacts in my ray tracer
1
smallpt: when to stop diffuse ray scattering