The mathematics of two dimensional interpolation on a quad

I am trying to wrap my head around how exactly the GPU interpolates texture coords on a quad. I realize to the GPU a quad is two triangles but I find thinking in terms of the whole quad to be easiest.

Keep in mind that the quad can be any quadrilateral not necessarily always a parallelogram. 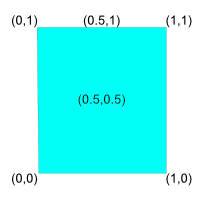 (It actually is easier to think (and compute) about this with triangles, but for the sake of the answer, let's first stick to your quad example.)

These barycentric coordinates can then be used to interpolate whatever kind of per-vertex values you want, be that positions or texture coordinates. It all reduces to a simple weighted sum. And even more than that, they can also be quite easily computed by simple vector algebra from any existing per-vertex values if you have the point's values given (comes down to just a few little 2x2 determinants for a triangle, or similarly easy computation). This means if you know a pixel's screen space position and those of the vertices, you can compute its barycentric coordinates. These you can then use to interpolate the pixel's texture coordinates (or normal, or whatever) from the per-vertex values, or vice versa.

So much to the theory, there's a few practical considerations to keep in mind, especially when using them for interpolation in a rasterizer, like GPUs do.

(This is a more general overview of the matter and how it generally works. For specific mathematical as well as technical details, I'd advise for further reading, maybe starting with the above Wikipedia articles.)

Not the answer you're looking for? Browse other questions tagged texture gpu interpolation or ask your own question.