While rendering my scene with OpenGL, I sometimes add an overlay which contains information, settings and a few draggable items. Currently, the overlay has a slightly transparent background to make text easily readable while still allowing the scene to shine through and to let the user see the scene behind/through the overlay.

I would like to replace the transparent background with a translucent background, which (as far as I know) requires the clear image of the scene to be heavily blurred*. And especially on mobile devices (e.g. iPad) with high resolutions and limited processing power, lots of texture lookups and real-time rendering don't work well together.

As suggested in the comments, here is an image I just found in the Wikipedia that describes the difference between transparency (right column) and translucency (middle column). 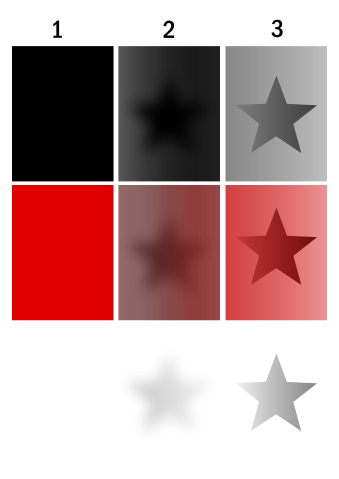 *I know there is the two-pass blur (first blur in one and then in the other direction) to reduce texture lookups. But for translucency this still requires quite a large number of texture lookups.

I think you may want to take another look at the iOS user interface if you consider real-time blurs to be out of range of mobile hardware: 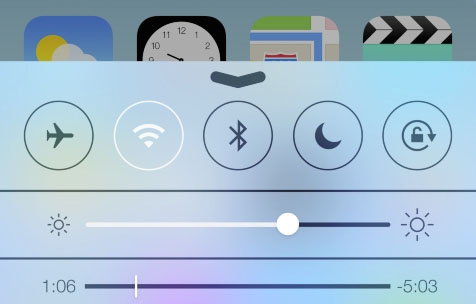 Blurs are totally in range of mobile hardware. Yes, you need a fairly large number of texture samples for a blur with a large kernel, but the texture samples are also cached very well, and you can use a separable blur, which effectively means that an MxN blur requires M + N samples, not M * N samples. You can also take advantage of hardware bilinear sampling to reduce the number of samples that your blur requires.

There's no way around it. If you want the area behind the textboxes to appear blurry... you're gonna have to blur it.

One way to mitigate the performance cost is to be sure to use a 2-pass separable blur.

Another measure that will probably help (depending on how much of the screen your textboxes cover) is to use scissoring or a stencil test to only compute the blur in the areas of the screen that will later be covered by textboxes. If you do this, be sure to leave an extra vertical padding of at least half the width of your blur kernel, otherwise, the second blurring pass will try to sample uncomputed texels in the intermediate texture, leading to artifacts or darkening of the blur near the edges of the textbox areas. (This isn't an issue for the first pass since you'll be sampling from the original unmasked texture there.)

15
How does state of the art real time hair rendering work?
7
How to improve on bilateral upsampling in real time scenarios
2
Real time image based lighting for arbitrary BRDFs coordinate alignment
8
Selection of GI techniques working in real time
1
Which technique is fast to generate real-time reflections?
3
glClear's result can't be seen when using bindless texture
4
Is a single shader and 1x1 pixel white sampler more efficient than frequent switching between shaders with and without samplers?
0
How to draw depth-based volume in real-time