The following is an excerpt from a 2005 paper on geodesics on triangular meshes, taken from section 3.5

In this case $p$ is a point on some arbitrary face in a mesh, $p'$ is a point on one of the 3 edges in the triangle and $D(p')$ is the geodesic distance to that point.

I am very confused as to how this minimization is achieved. The paper doesn't go into detail, so I assume it's trivial, but I am not seeing the solution of the top of my head.

Given an arbitrary interval (segment) the shortest point to it is either the orthogonal projection of the point $p$ onto the segment or one of the end points of the segment (depending on where $p$ is located with respect to the segment).

However, this is not necessarily the point that minimizes the expression $||p - p'|| + D(p')$ or in other words, $p'$ is not, in general, the orthogonal projection of $p$ onto the segment.

The only algorithm I have is to naively check epsilon offsets along the segment and picking the shortest one. There has to be a better way than that.

I have drawn a diagram on Geogebra to show the problem: 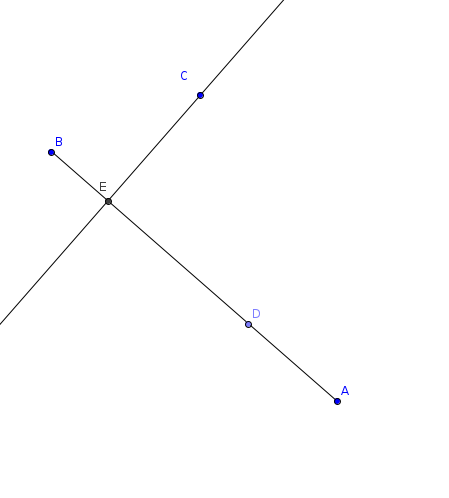 $\overline{BA}$ is the segment, $C$ is the point we are looking to minimize the distance from. $D$ is the frontier point, which is the orthogonal projection of the Geodesic source (the source point of all geodesics in the mesh), $E$ is the orthogonal projection of $C$ onto $\overline{BA}$. Clearly the optimal point is somewhere between $E$ and $D$ but I don't know how to find it.

The above seems to work in the simple tests I have generated at minimum.

Not the answer you're looking for? Browse other questions tagged mathematics computational-geometry mesh geometry or ask your own question.

1
Very efficient/fast marching cube implementation
1
Finding geodesics on a mesh?
1
Approximating Geodesics in a half edge DS, how can I refine my mesh to get good approximations
0
Is the laplacian operator for meshes just the sum of the differences of neighbouring vertices?
4
Gradient descent (Not ML) on arbitrary meshes
3
Mis understanding of the Heat Method
5
Existing method to automatically fill in this sort of concavity in meshes?