How are colors really mixed?

I'm kind of stuck on this one. When following a conventional, high-level shading tutorial, you'll come across these images that are like ambient + diffuse + specular = result, but I can tell that it's not straight addition (otherwise the picture would seem overexposed).

Your intuition is right that you often end up with overexposed specular highlights with this style of shading. In a modern, physically-based pipeline, it's common to instead use an energy-conserving shader. The contributions of each layer (specular, clear-coat/lacquer, diffuse, subsurface) are still added together, but the amount of light in each layer reduces the input amount of light for the next layer. That is, if the surface is giving a strong specular reflection, it's reflecting most of the light, so less light is available for the diffuse layer. In the same way, any light that's reflected by the diffuse layer reduces the amount of light available for subsurface scattering.

I've done an experiment with two modes of addition of the three images. In the resulting images below, on the LHS, with the label "Addition", is my result, on the RHS is the rightmost image from the OP. 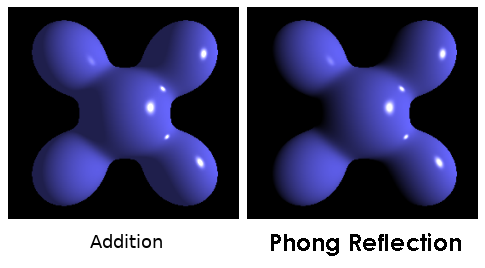 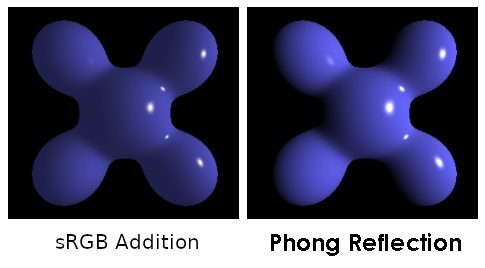 So, you can see that both ways of adding colors result in a sharp border from the ambient lighting contribution — the leftmost image in the OP, while the rightmost supposed result doesn't have such a border on some sides.

I'm not really sure how the rightmost "Phong Reflection" image was created. It may have been manipulated, e.g. some gamma adjustment or something like that. But in any case, in both ways of addition above the image didn't get overexposed as you supposed it would.

Not the answer you're looking for? Browse other questions tagged color shading or ask your own question.

6
How to do a color separation with more than 3 primary colors
4
How can you interpolate over an array of say 5 colors?
4
Generating and Combining Spectral Colors
0
How are normals assigned to vertices in different types of shading?
1
Some questions about working in 0-255 integers instead of single precision floating point colors
3
map 16-bit integers to RGB colors with monotonic relative luminosity
3
What's the justification of multiplying colors together?
2
Why do computers more efficiently store black colors than white colors in computer graphics?
0
OpenGL old-style diffuse shading producing unexpected effects