I had a z-fighting/z-clipping issue with a scene containing some very large objects yesterday in 3ds max. It can be seen in the image below: 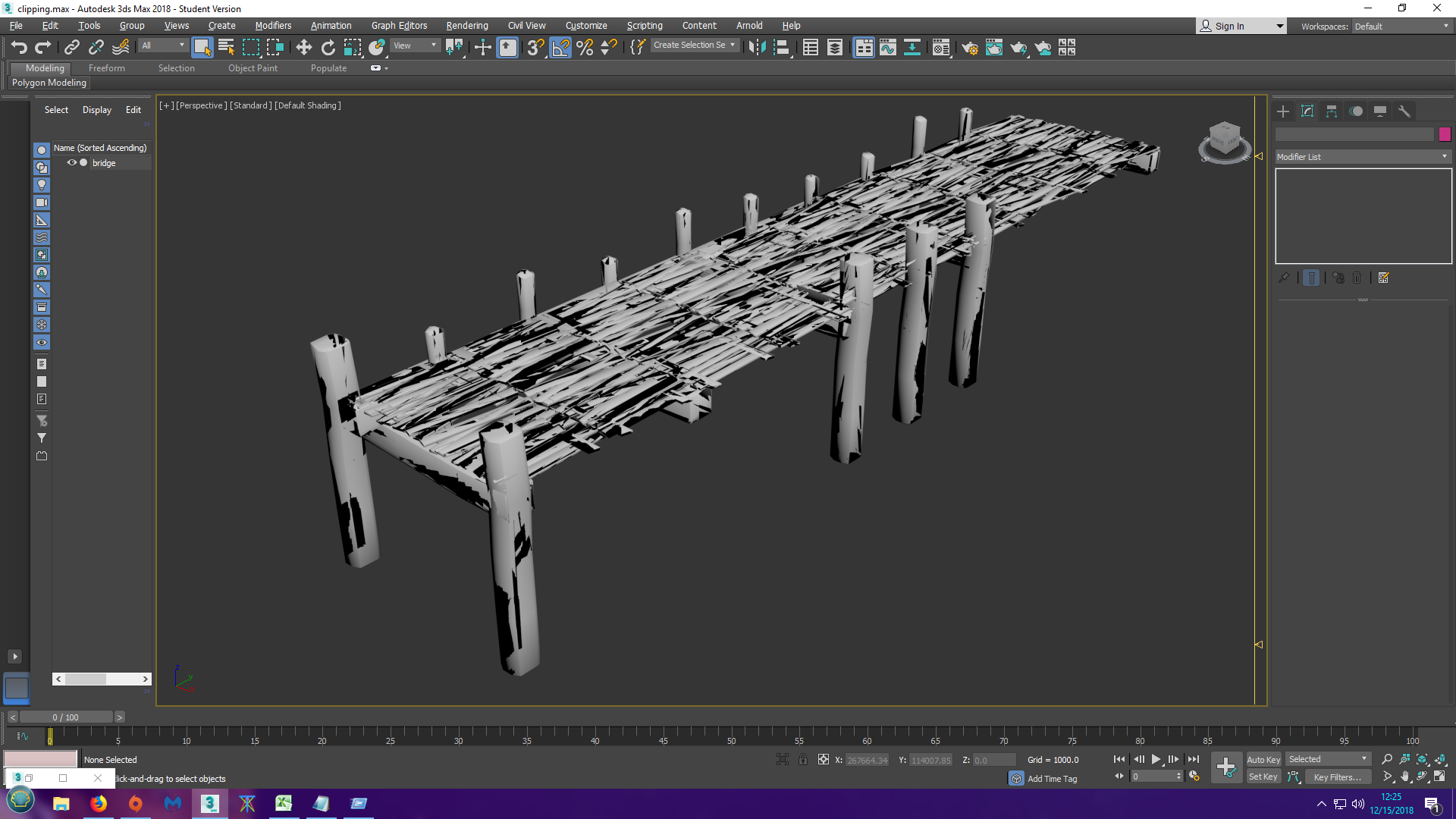 For some reason downscaling the scene significantly (a factor of 100 approx) resolves the z-fighting issues... Please help me understand how reducing scene scale could resolve this issue and why this issue only occurs with very large scenes/objects.

From what i understand z-fighting occurs in this case because the near and far planes are very far apart compared to the minimum and maximum distance of the rendered object(s) relative to the viewport.

Please correct me if I'm wrong, my basic understanding of the z-buffer is as follows:

1) The distance of each rendered pixel of the object(s) is compared to a standard value stored in the z-buffer.

3) before the z-depth value is stored in the z-buffer it is divided by a certain value (floating point type value), not sure why the number is devided. perhaps to reduce memory usage by storing smaller values...

I managed to fix the z-fighting in the viewports by increasing the near plane (in viewport settings) from 0.1 ish to a larger value.

Please take a look at the image below: 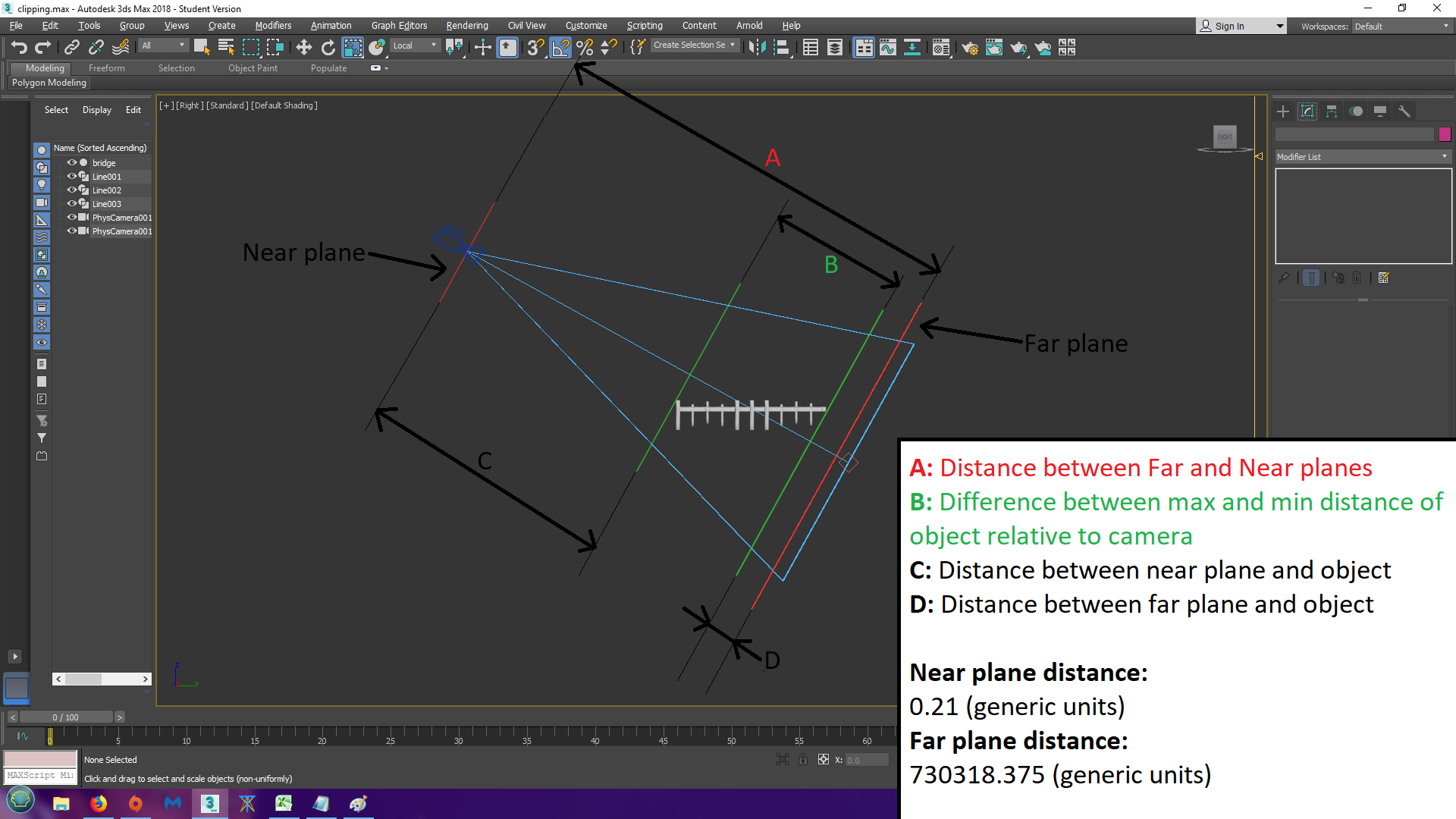 The red planes are the camera's near and far planes. The green planes I have drawn myself and they indicate the minimum distance of the object relative to the camera and the maximum distance of the object relative to the camera. When scaling the scene by a factor x the ratio between the variables A,B,C,D (please see the dimensions drawn in the image) should stay approximately the same (as in the ratios A/B , A/C, A/D, B/A etc. should be approximately equal before and after the scaling process takes place). Therefore the max and min depth relative to the near and far viewport planes should be approximately equal. And as a result the depth precision of the object should not change when scaling (I think). My understanding is clearly incorrect since the z-fighting disappears when downscaling. Why is it that scaling has any effect on the z-fighting? Does 3ds max automatically adjust the far and near plane distances relative to the viewport when scaling the object/scene?

I've read about something called depth precision (https://developer.nvidia.com/content/depth-precision-visualized). Assuming this (objects(their pixels) that are closer to the camera being stored more accurately in the z-buffer) is true in 3ds max it makes sense that when zooming in really close to the object in the viewport...the z-fighting disappears. however, when I zoom out quite a lot in the viewport, the z-fighting also isn't visible anymore even though it should in my mind get worse since the precision of the depth info stored in the z-buffer is lower for objects further away from the camera. Am I missing something ? 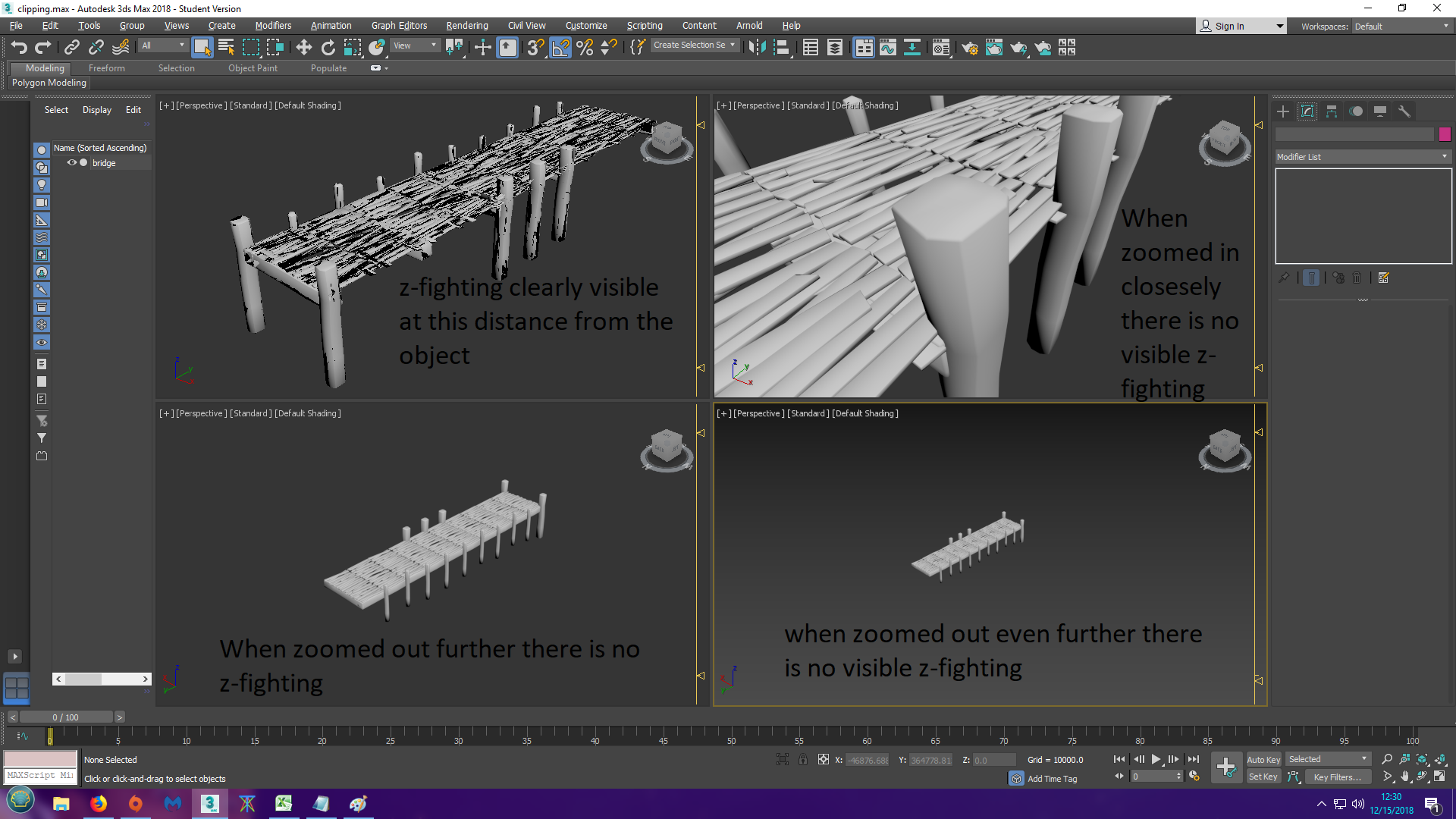 PS: the viewport clipping distances are set to the default in the image below and the first image of this post.

If I have been unclear or incomplete about anything please let me know and I will try my best to explain/elaborate. Any help will be greatly appreciated. Thank you very much!

Unfortunately, I don't know how 3ds max handles its Z-buffer or its near and far planes so I can't give a definite answer. There are many ways the software could handle this.

However, you are on the right track. Z-fighting occurs when there is not enough numerical precision to distinguish two "objects" from the scene rendered at the same pixel. In such cases, the two pixels "fight" one another over which one is closest to the camera and flickering occurs.

These factors influence how a scene is susceptible to Z-fighting:

Of these, you really only have control over the near and far planes from what you say. It looks like your model is too big for the default way 3ds max handles this so I suggest making the near plane value bigger. An increase of the near plane from 0.1 to 1.0 (*10) will give the same precision increase as dividing the far plane by 10.

For your other question, you usually get less Z-fighting when an object is closer because there is more precision in the depth buffer closer to the near plane.

Also, for your other question: Why do GPUs divide clip space Z by W, for position?

Right Click on the viewport PERSPECTIVE and enable viewport Clipping. On the right of the screen, 2 yellow arrows will appear. Drag the bottom arrow up a little. Worked for me.

Not the answer you're looking for? Browse other questions tagged 3d projections shading depth-map z-buffer or ask your own question.

8
Why do GPUs divide clip space Z by W, for position?

10
Is depth of field incongruous in a 3D still image?
3
How to understand Z-Fighting?
6
Bokeh from depth map
8
Why do GPUs divide clip space Z by W, for position?
0
How to calculate position from depth pass of the ZED camera?
1
Layer rendering in Vulkan
0
Scale Sampled Depth Value
1
how to change the near clipping plane of a perspective projection matrix for OpenGL