Why do GPUs divide clip space Z by W, for position?

Background:
I found that it is very easy to use a linear depth buffer, using only a slight modification to the canonical vertex transformation. The simplest method is found at the bottom of https://www.mvps.org/directx/articles/linear_z/linearz.htm.

However, the caveat is that it only works for triangles that don't need to be clipped against the near or far planes. (And an alternate solution, of performing the perspective divide in the vertex shader, will yield a similar problem for the other four frustum planes.)

Because clipping requires linear interpolation to work across all four clip space coordinates, I think it's impossible to work with linear depth, using only a vertex shader. But the reason for that is all down to Z being divided by W.

Why is that done? X and Y need to be divided by distance from the camera, but the Z coordinate does not, to fit perfectly into the NDC box.

If you are doing a perspective image and your model has implicit intersections then, if you use "linear Z", those intersections will appear in the wrong places.

For example, consider a simple ground plane with a line of telephone poles, receding into the distance, which pierce the ground (and continue below). The implicit intersections will be determined by the interpolated depth values. If those are not interpolated with 1/Z, then when the projected vertices have been computed with perspective, the image will look incorrect.

I apologise for the non-aesthetic quality of the following illustrations but I did them back in '97.

The first image shows the required rendering effect. (Note that the blue "pylons" go quite a long distance under the ground plane so are clipped at the bottom of the images) 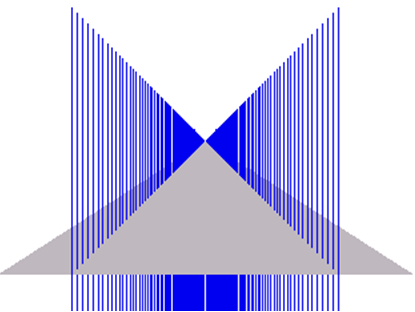 This second image shows the result of using a non-reciprocal depth buffer: (Apologies for the change of scale - these were copied out of an old MS Word doc and I've no idea what has happened with the scaling.) 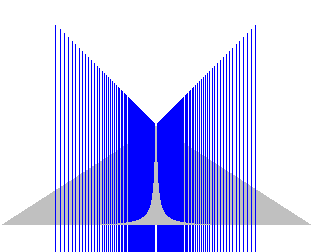 As you can see, the results are incorrect.

On another note, are sure you really want a linear Z representation? If you are rendering perspective, surely one wants more precision closer to the camera than at a distance?

“if those are not interpolated with 1/Z” that I don’t understand. What interpolation is that?

The rendering system/hardware will linearly interpolate the screen space z, so at the 1/2 way point of the line, as it appears on-screen, i.e. at pixel (10, 0), we would get a projected (inverse) Z value of 0.55, which corresponds to to a world space Z value value of ~1.818. Given the starting and end Z values, this is about 20% along the length of the line.

If instead, we tried to interpolate using the original Z values, we'd end up with Z corresponding to a world space value of 5.5. As long as nothing intersects, you might be ok (I've not thought about it too thoroughly) but anything with implicit intersections will be incorrect.

Using Z/W for the depth buffer goes deeper than just clipping against the near and far planes. As Simon alluded to, this has to do with interpolation between the vertices of a triangle, during rasterization.

Z/W is the unique option that allows NDC depth values to be correctly calculated for points in the interior of the triangle, by simply linearly interpolating the NDC depth values from the vertices, in screen space. In principle, we could use any function we like to map camera-space Z to the depth buffer value—but any other choice than Z/W would require more complicated math to be done per pixel, which would be slower, and more difficult to build in hardware.

Note that if you use a linear depth buffer, then of course linearly interpolating depth values will be correct in world space...but not, in general, in screen space! And it is screen space that matters for rasterization, as we need to be able to generate perspective-correct depth values (and other attribute values, like UVs) for each pixel center, or other sample point, within the screen-space bounds of a triangle being rasterized.

4
What happened to my texture mapping?
3
Why are depth buffer values clamped to (0, 1)?
3
Correct way to interpolate 1/z?
2
3ds max: Z-fighting when working with Large Objects

5
Why does opengl perform clipping in clip coordinates?
1
Rendering a volume that might be completely clipped in OpenGL