So I have a bit of a predicament I am trying to solve. I have 10,000 triangle strips I am trying to draw. Each one has a z-order for the entire strip and within each strip the most recent triangles need to have a higher z order than the older one. So essentially the z order of a triangle is (stripIndex / 10000) + (age / MAX_AGE) where MAX_AGE is somewhere around 100 frames. I am not sure about this number yet.

At start time all of the data to store this is initialized and a ring buffer of some form is used so that the most recent triangle's are in a new position each frame.

This ring buffer is useful because only 2 triangles will have to be written for each frame per triangle strip so no data has to shift or move. You just over-write the oldest data.

The trick is I want to do alpha blending between these triangle strips so I need to have the geometry drawn in order from front to back. I am experimenting with different layouts that will allow me to minimize draw calls and CPU stress required. This is an unsolved problem for me but I think I am going to have to do 10001 draw calls. But that is not what this question is about.

So while trying to do this I ran into an odd GPU phenomenon I cant explain. Right now I am rendering with a simple no-depth additive blending Metal pipeline that looks like this.

Memory configuration 1 has a triangle for the n'th strip in the i'th ring buffer position located in the triangle buffer at i*MAX_STRIPS*4 + n*4 th position in the buffer. So in memory a single strips triangles are very spread out but a concentrated chunk of memory is updated each frame.

Memory configuration 2 has a triangle for the n'th strip in the i'th ring buffer position located in the triangle buffer at the n*MAX_AGE*4 + i*4 th position in the buffer. All of a single triangle strips vertices are close together in memory however writing is more spread out.

Now I could understand a small difference in CPU time but what I dont get is this difference in GPU time. Any clue as to why this might be happening. 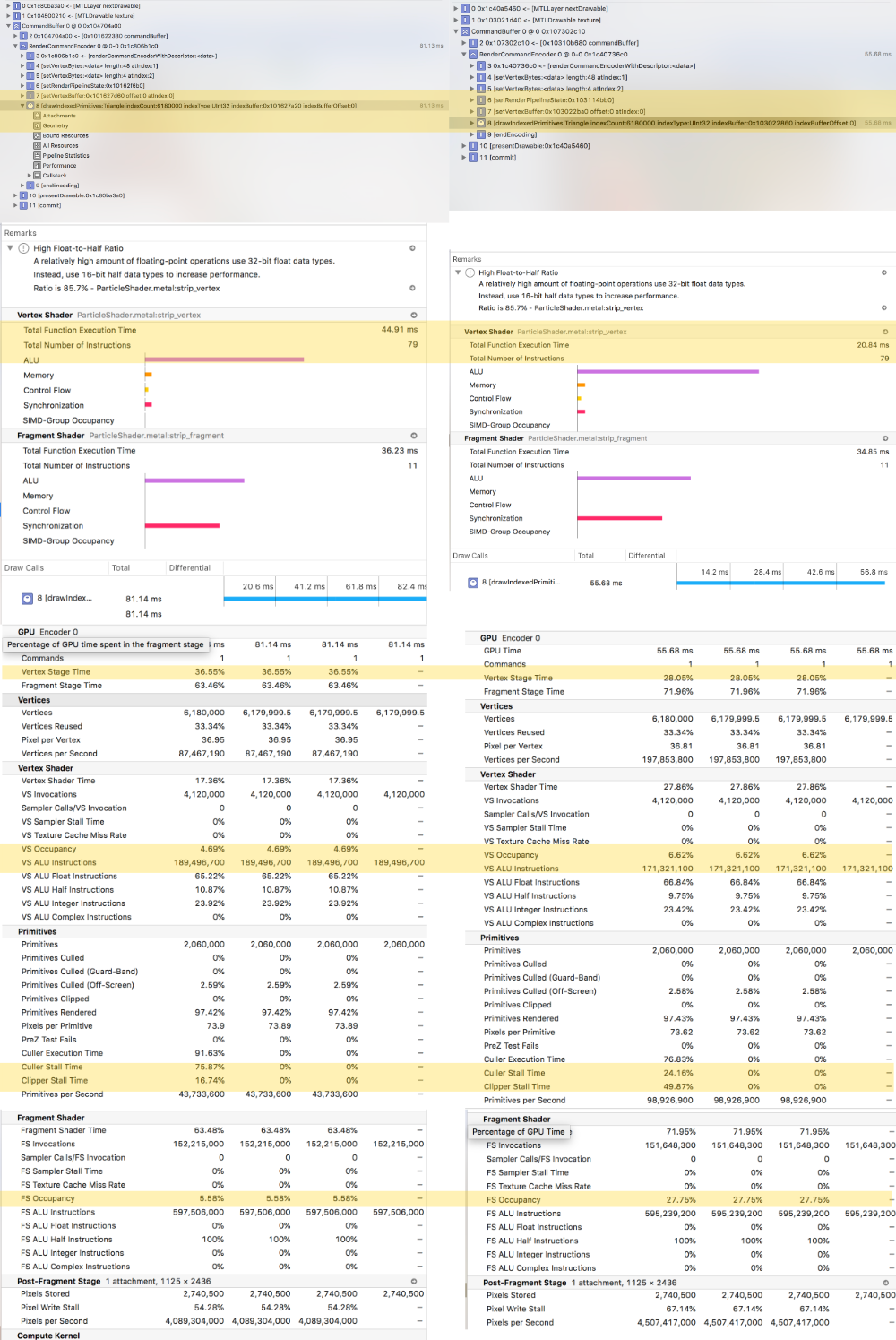 And the generation of the vertex buffer for all interested

Does anyone have a good explanation for why this is happening?

I think you're seeing cache effects. The GPU will begin vertex processing for each strip in sequential order, and in configuration 1 the GPU will fetch a different chunk of memory for each triangle in the strip (since, as you said, the strips themselves are not contiguous in memory in this configuration).

If I understand correctly, each entry in the ring buffer you are referring to is a triangle, so you will have at least 3 vertices adjacent to each other (in configuration 1). This has decent spatial locality, but fetching this memory will probably also pull in memory for adjacent vertices, which won't be immediately useful (since it belongs to a different strip).

In configuration 2, the adjacent vertices will be immediately useful, since they're the next vertices the GPU will need to render for the current triangle strip. The result is, probably, less total memory traffic.

This is a somewhat simplified explanation (for example, it brushes over the parallelism occurring on the GPU), but it seems to match what you're observing. One way to justify the choice of configuration 2 over configuration 1 is that you're making it easier on the GPU at the cost of the CPU—however, the CPU has 1/MAX_AGE of the work to do as the GPU each frame, so optimizing for CPU updating ("a concentrated chunk of memory is updated each frame") will be less valuable.

Not the answer you're looking for? Browse other questions tagged gpu vertex-buffer-object metal or ask your own question.

2
GPU Architecture: What are the theoretical limits on triangle throughput in modern GPUs?
2
Can I use QueryPerformanceCounter to measure single draw or compute call performance?
9
The most performant way to organize vertex data on modern GPUs
4
Using multiply and accumulate of 4x4 matrices for ray-triangle intersection tests on GPU
1
Are the benefits of a Metal early depth test limited to one draw call
0
Efficiently transferring only needed parts of the vertex data to the GPU (C++/OpenGL)