I am currently trying to implement a specific directional light type.

This light type has been used in the game INSIDE and is called orthogonal spotlight (aka local directional light). I assume that this is a directional light which behaves like a spot light and have a squared or rectangular attenuation but I have some difficulties to integrate it in my deferred pipeline and get the general concept of this light type. 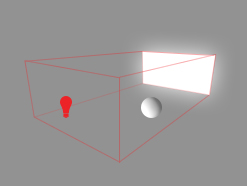 I hope that you'll be able to give me some clues. Thanks a lot !

Alan Wolfe is pretty spot on, but I will sum up any way :)

In an actual game, you of course want to use some sort of acceleration to discard early; we used old-school stencil culling (and should have used depthbounds), but likely tiled culling, clustered culling or similar is better.

You could use zgreater testing to discard pixels where background is entirely behind the light, but iirc on most modern GPUs this will not actually be an advantage, as there will be no early-discard due to the hierarchical zbuffer being primed in the direction of zless.

I would start by looking into deferred decals (you can start here for example, this blogpost has a lot of useful links)

If you understand how the positions are calculated and compared with the volume then you should be able to apply the same logic in the lighting phase.

Not the answer you're looking for? Browse other questions tagged shader glsl lighting hlsl deferred-rendering or ask your own question.

10
Efficient rendering with many light sources
2
Hlsl - registers type
5
Modern way of light sources in OpenGL?
3
How to adapt diffuse/GI light mapper to directional light maps?
4
Special Texture Stretching without deformation
3
Phong shading in OpenGL: line of light from the center of the world
3
Directional Light ViewSpace Calculation
0
GLSL Debugging Volumetric light
1
What are the type constants that the documentation for glGetProgramResourceiv() refers to?