2D projection from some points

I am going through an undocumented function that takes in three points and a Z-value that projects three points on the plane defined by Z-value. I want to understand the mathematical theory behind it and I need your help to decode the function:

The function calculates the intersection points between two edges of a triangle and a plane that is assumed to cut it. It returns a line segment running along the cut.

Or more generally, the function calculates where the intersection points with the two edges would be, if the edges were extended to infinite lines. Given that it's called "project", that might be the intended use-case; hard to know without seeing how this gets used in context.

The first two lines of math are calculating the intersection point of the $p_0 p_1$ edge with the z-plane. It works by linearly interpolating the $x, y$ values along the edge based on the proportion between $z$ values. The second two lines do the same thing for the $p_0 p_2$ edge.

One odd thing is that the function is using integers everywhere. Presumably it's because the program is using fixed-point coordinates (which makes good sense for a lot of geometry processing applications due to its uniform precision). However, the way it's done here seems oblivious to rounding: the integer divisions will truncate any fractional component instead of rounding to nearest.

Let us look at the first line in detail:

Finally the entire expression is can be read as follows:

And visually its as follows: 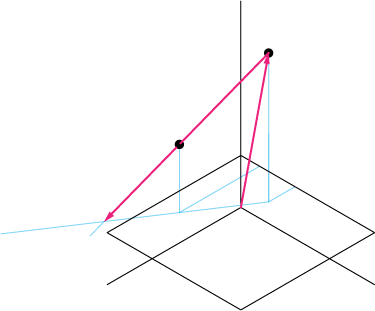 Image 1: The vectors in the calculation, (blue lines sow offsets and projections for feeling of 3D)

And the entire function gives the same for the two edges of your triangle. Please note that it is perfectly possible that the result is degenerate as the choice of what edges to use is not checked for so one edge MIGHT be parallel to the plane. Also selection of points to send changes what is being projected. 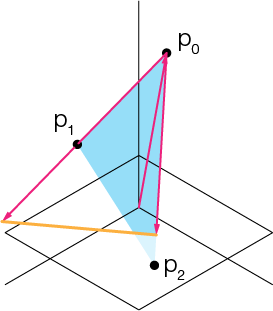 Not the answer you're looking for? Browse other questions tagged projections or ask your own question.

10
How to unproject quadrilateral into rectangle?
5
Where should I project a polygon corner when it is behind me?
4
understanding glm::perspective vs glm::ortho
7
How am I able to perform perspective projection without a near plane?
2
3ds max: Z-fighting when working with Large Objects
0
Understanding the near clipping plane
3
How to unproject cursor with orthographic projection