How to get coordinates of opposite direction from mouse release point relative to a point? 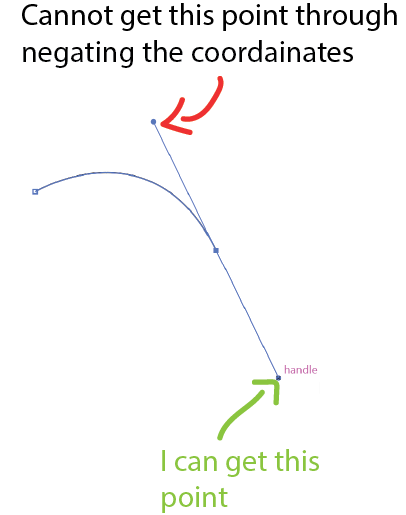 Assuming you're doing spline curves: Let p be the point at the end of your curve (the one marked with a solid square above). Let h be your handle point (the one denoted as such). The vector from p to h is (h-p). To get the other handle point, take p + -(h-p). This can be more concisely written 2p-h.

One way to approach this topic that can help is to distinguish between points and vectors as distinct types and make sure your operations fit into one of the "known good" scenarios:

You can think of this as the points are the real dots on the screen and vectors are just invisible arrows. You can only get a point from a vector if you attach it (ie. add it) to another point.

You can also kind of think of this as the points are unsigned quantities and the vectors are signed quantities. The points have only position, whereas the vectors have only direction -- even though they can have the exact same representation in the computer. You could enforce the distinction to some degree by using integers for points and floating point for vector components. This also emphasizes the scalability of vectors, a feature that points lack.

Aside: a more apt analogy in programming might be to consider points as *pointers and vectors as ptrdiff_ts. But those would be a bad choice of types for implementing these objects for graphics.

Not the answer you're looking for? Browse other questions tagged opengl bezier-curve tangent point negate or ask your own question.

2
Bezier Curve Tool Controlled by Mouse
2
I'm trying to get a 2D screen position so I unproject a point from 3D into 2D screen coordinates by that following function:
2
Texture loading- erratic working
0
How to get coordinates of mouse after left mouse button is released after drag in OpenGL?