Weird patch on reflective spheres on planes in raytracer

I am writing a small raytracer in python , everything was working fine but when i implemented plane geometry then the reflective spheres are getting weird patches on lower bottom. image below:

I guess this is happening because of some error in calculating lighting with wrong normals? but i am unable to figure out exactly what. 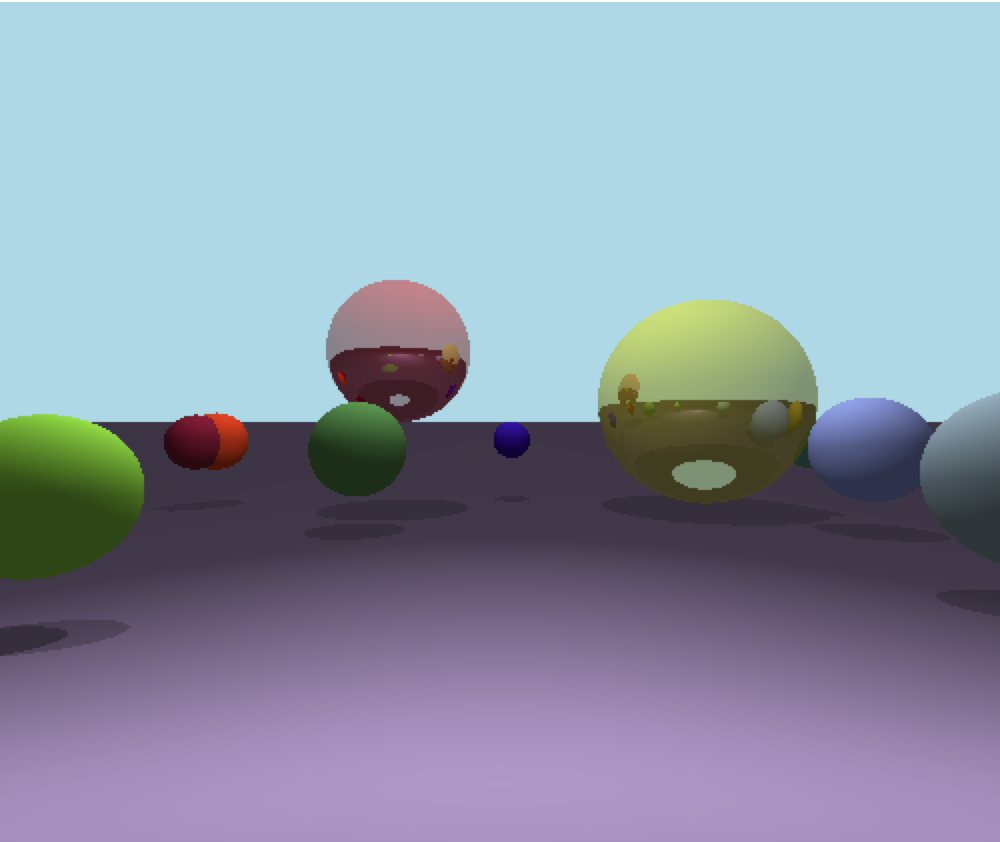 I have to disagree with @jack11111, this is definitely not a clipping issue. I have two possible explanations which you can easily test and verify.

Looking closely at your image I believe I can explain what is happening there. The rays hitting the suspicious regions at the sphere will reflect towards ground in a direction very similar to the ground normal.

You ground does not seem to be reflective, but if it were: The rays would reflect back in almost the exact opposite direction hitting back the ball and then heading towards the camera. So they would hit the ball twice which could cause its color to gain dominance. You can test this theory by comparing the rendering results with maxDepth = 1. If the discontinuity disappears then that is the problem.

My second explanation is much more likely to be the case. It is also based on the observation that the rays reflected from the suspicious patches hit the ground in a direction pointing almost exactly down. I noticed a bit strange setup of your plane in your code. It has its normal pointing down!?

I am not sure how the Lambert shading of the ground works then (should be then all just ambient in fact), but assuming Vec(0,1,0) is your up then the intersection will in fact yield None

So to test this explanation, just change the returned color for this case to black and see if the patch darkens.

I hope that helps. Please let me know the results.

After the author confirmed my second explanation I found the reason in the code. The source of the problem is in the ray-plane intersection method.

Most important of all the epsilon in the comparison should be omitted, since that is causing the patch to be discontinuous. As mentioned earlier, the incoming ray direction is almost Vec3(0,-1,0). You have set your plane normal to exactly Vec3(0,-1,0) so the dot product yields something very close to 0.

So the quick fix would be:

Your plane normal is inconsistent with how a normal is usually defined. I believe your plane is not supposed to face down. It would be much better and correct to have the plane normal pointing up and then testing for a negative dot product.

A front-face hit occurs when the face normal and the ray are pointing in opposite directions, i.e. their angle θ is smaller than -π/2 or larger than π/2, so cos(θ) < 0. Note that denom is in fact cos(θ). If |θ| < π/2, i.e. cos(θ) > 0, then it is a back-face hit. You ignore such hits for now but once you add transparency to your raycaster you will need them as well.

The correct way would be:

It looks like the light and colour calculation for the sphere reflection is peaking and may need to be clipped to the range 0-255. This video around 1:21:45 mark shows an example of this.

6
BRDF and Spherical coordinate in ray tracing
7
Ray tracing - partial derivatives for texture lookup
3
Ray tracing: transforming ray to object's local space for intersection test
3
Weird artifacts in my ray tracer
3
How do I convert a hit on an infinite plane to UV coordinates for texturing in a Raytracer?
2
Strange sphere reflection effects in ray tracing project. I cannot figure out what causes them
1
Prove radiance contributions of deeper paths fade away