In the Bresenham circle drawing algorithm, we have to choose between the top and bottom pixel, but what we always do is using the circle's equation ($f(x, y) = x^2 + y^2 = r^2$) to determine which of the two pixels is closer to the circle (r is the radius).

Okay, we're using the circle equation to determine which is the closest point to the circle but why not simply using the euclidean distance? What is the point to use f instead of the actual distance? It would be easier to understand (this f function seems to come out of nowhere). 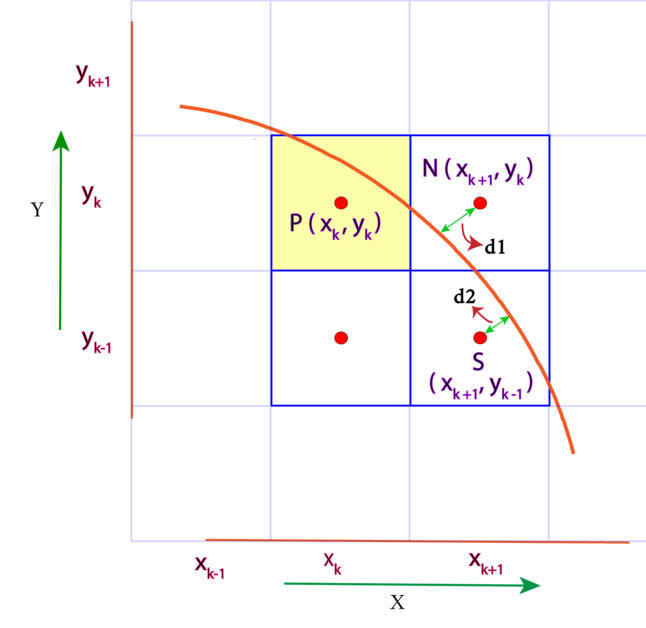 After a short research, I found this site, which describes the algorithm. I didn't know it before. An important thing you didn't mention in your question is the calculation of the decision parameter $d$, which is:

Okay, we're using the circle equation to determine which is the closest point to the circle but why not simply using the euclidean distance?

Most probably for performance reasons. Using the Euclidean distance requires you to calculate 2 square roots, which is quite expensive when compared to simple multiplication ($r\cdot r$). On a Haswell CPU, you can perform 6 independent multiplications at the same time as calculating a single square root.

If you optimize the Bresenham algorithm you will probably get something like that:

EDIT As mentioned in the comments to this answer, the Euclidean length and the Bresenham algorithm won't give you the same results. While the Euclidean length will always give you the Pixel with the closest distance of its center to the arc, the Bresenham algorithm will favor points inside the circle, even though they are a little bit farther away. However, this error gets smaller the closer you get to the circle and shouldn't be noticeable.

After rereading some tutorials like the one above or this one, I am not totally sure if they are really stating that they take the closest point. The tutorial I linked says:

Language details are not my strong suit, but I think "implies" is meant more in the way of "indicating" something. In this case, it does not mean it is the exact result.

Anyways, after some elongated calculations, you are right, that $d=f\left(N\right)+f\left(S\right)$ will give wrong results in favor of the inner point if both distances to the circle are quite close. I did some error estimation. With:

If you solve that for $\epsilon$ you will get:

You can get 2 interesting pieces of information from that. First, as you already claimed, the Bresenham algorithm does not take the exact distance to the circle when deciding which point is the next one, otherwise $\epsilon$ must have been 0. However, the second information is: If $a$ and $b$ are both on the circle, the error vanishes.

I was wondering how much closer $a$ must be than $b$ until it is selected. So I did the following:

The reasoning here is as follows: If $\tau = 0$, then both points have the same distance $\delta$ to the circle. So the right-hand side of

From this, you can see again that both approaches give the same result in the special case that both points lie on the circle since $\tau$ gets 0. Putting in some real numbers will also show, that $\tau$ does not get too big. I am no mathematician, but I think you can show, that the "error" and $\tau$ get relatively small with a growing ratio of $r:\delta$. So if you are not drawing circles with a radius of just 2-3 pixels, the differences in the visual output should be negligible.

Apart from that, taking the Euclidean distance might also not be the best way in the first place. In the end, a rasterized circle is just an approximation and not a true circle. So there is no "correct" rasterization method for that. With enough distance, you won't notice that it contains of pixels. But in this case, you won't also notice anymore which pixels center is closer to the "true circle".

The Euclidean distance and Bresenham algorithm result in slightly different rasterizations (probably not noticeable most of the times). The Euclidean distance is much more expensive to calculate due to the square roots. Additionally, as one can read in the linked sources, the Bresenham algorithm can be optimized even further than written in this answer, which makes it really fast. If I got it right, one just needs 1-2 multiplications and 2-3 additions/subtractions per pixel.

Not the answer you're looking for? Browse other questions tagged algorithm drawing midpoint or ask your own question.

8
Can (and how so) shaders paint screen pixels beyond those that occupied by the shaded mesh?
4
Bug with the Bresenham's line drawing algorithm?
9
Understanding Jump Flooding Algorithm (JFA) for Voronoi Diagrams
2
Deciphering Affine/Projective Transformation Code
1
Flood-Fill and scanLine algorithms are line-based floods but I want square based floods
3
Ray vs AABB algorithm that also gives which side was hit?
1
Using Bresenham's circle algorithm (or another alternative algorithm) to draw an arc
1
wall clock using bresenhams circle drawing algo