While following scratchapixel's tutorial on indirect diffuse implementation in path tracing, the samples gets divided by the pdf, which in case of a uniform pdf results in $1/2\pi$ so we have that the sum of N samples gets multiplied by this factor: $$k=\frac{1}{N * \frac{1}{2 \pi}} = \frac{2\pi}{N}$$

The problem with this is that unless the albedo color is very dark, the final color quickly increases:

(From "Step 7: Add the Contribution of the Indirect Diffuse..." in the link above)

Other implementations instead just average the samples and the $2\pi$ term above is completely absent, like in Shirley's "ray tracing in a weekend" p.20

Which one is correct?

There's a difference in Shirley's and scratchapixel implementation, in the fact that Shirley's is a progressive path tracer (evaluates one path at a time) 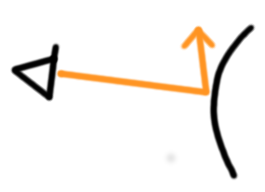 While scratchapixel's is a non-progressive or branched path tracer, evaluating multiple paths at once: 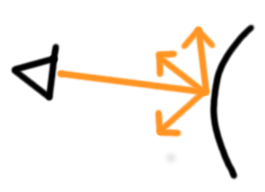 But I believe this does not allow us to remove the $2\pi$ term in the former, because we are doing the same thing (sampling the BRDF hemisphere) albeit differently. 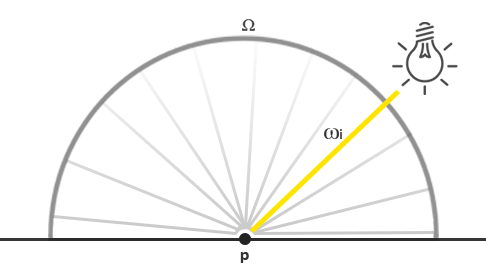 Here the integral over the hemisphere is 0 except in the direction $\omega i$, but (for example considering only diffuse) we only use:

where $L(P)$ is the radiance from the point $P$, and $L(\omega i, P)$ gets replaced with our light radiance, $\theta$ is the angle with from $\omega i$ to the surface normal. Where has the solid angle term ($ \omega i$) gone?

Browse other questions tagged lighting brdf or ask your own question.