I've got a hard time to understand how we would implement the following in practice. I'd be great if someone could explain the details for the example below.

Assume we're generating a path ${\rm x}=(\rm x_0,\rm x_1,\rm x_2)$ of length $2$ using the $(s,t)$-strategy in bidirectional path tracing (see picture below). Assume that there is no participating media in the scene and we're using a pinhole camera.

The abstract process is described in Section 6.1 of the paper Charted Metropolis Light Transport. 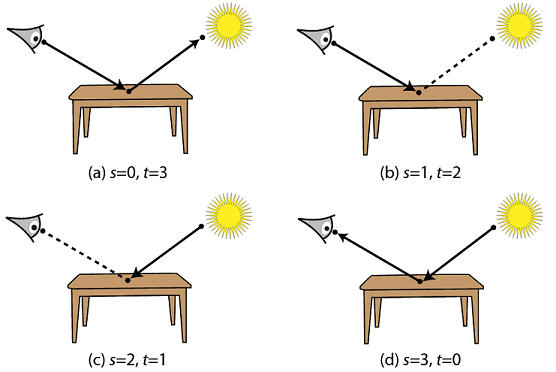 $^1$ It might actually be a composition of multiple BSDFs and $u_3$ is used to select one of it.

EDIT: I'm actually trying to implement this in PBRT. So, if necessary, feel free to assume that each BSDF has only a single component and that this component is of type (pbrt::BSDF_REFLECTION | pbrt::BSDF_DIFFUSE). Thus, you can assume that there is a single Lambertian BSDF at each surface point.

2
How does Primary Sample Space Metropolis Light Transport work?
1
In bidirectional path tracing, is a camera subpath with $n$ vertices determined by a fixed number of random numbers?