Calculating the angle between two polygons

For my application, I want to render models as polygonal surfaces in 3D space and have edges that are bent "outwards" to have a solid line and those who are bent "inwards" to have a dotted line. So if I look from the top of the edge if they "bend towards me" they are bending inwards, if they bend away from me, they bend outwards.

See the following illustration, where the red arrows are the normal vectors of the red polygons. The blue vector is the plane perpendicular to the left polygon that passes through the edge common to both polygons. 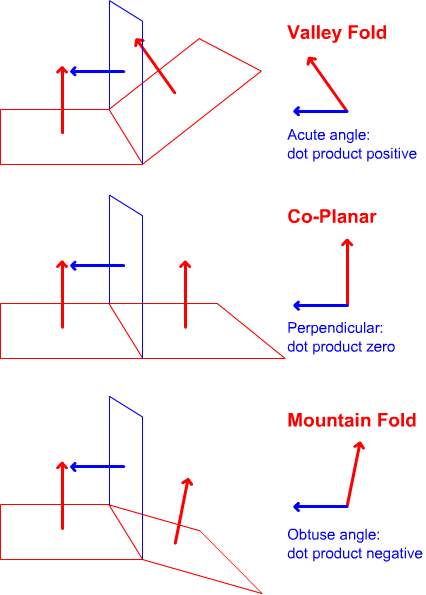 If your polygons are planar, then you can compute the normal for any polygon ABC by computing the cross product AB x AC.

To obtain the blue vector, take the cross product of the normal of the left polygon and the vector that is the common edge.

The angle you're looking for is formed between this blue vector and the normal to the other polygon (the red vector on the right in the diagram).

You then compute the cosine of the angle between two vectors u and v by taking their dot product, then dividing by their magnitudes.

Not the answer you're looking for? Browse other questions tagged 3d vectors or ask your own question.

5
Graphics Pipeline: Viewspace & Back face culling incorrectly
2
How can I draw a tube on basis of position and angle between two 3d points?
5
Where should I project a polygon corner when it is behind me?
3
Correcting my "look-at" matrix so that it works on non-camera objects?
0
The distance from the cube sides to the parallel projection plane
0
Calculating Material/Texture Placement from Bitmap to 3D Model
3
How can I get a signed distance (SDF) from a mesh?
0
Calculating UV coordinates for sampling texture atlas