Using transformations to get from A to B image

I try to solve this, 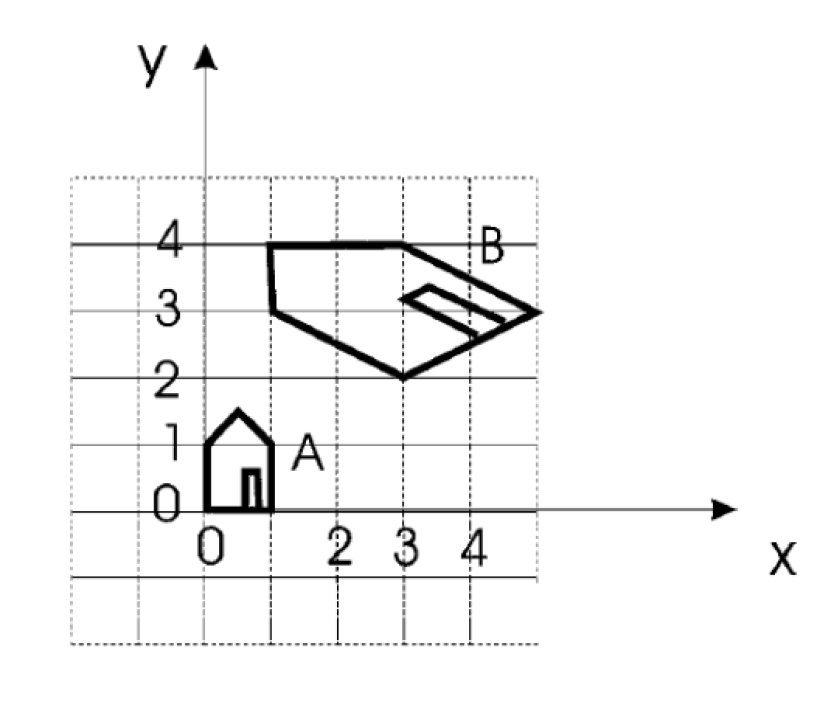 So, I enlarge the bottom of the house and the sides, to the same size of B image.

But I stuck with that.

What is the idea of this question?

Since parallel lines have remained parallel (i.e. meaning we can probably assume the w component of homogeneous coordinates is always 1), we can just pick 3 starting points and their destinations, e.g.

define M to be your (homogeneous) transformation matrix as

To be really thorough, you could also then check that all the remaining points are transformed correctly by your result.

If you don't want to work through the maths yourself, the resulting matrix is

Since the only answer requires homogeneous coordinates, a $3\times3$ matrix inversion, as well as a $3\times3$ matrix multiplication, here's something simpler, not as tedious to compute, and also more geometrically intuitive (it also gives a better idea what a linear map can do, and what it cannot).

The right scaling may be moved inside the left one (since the right is uniform scaling, hence commutative, or just a multiplication by the scalar $\sqrt{2}$, I just thought it's geometrically more intuitive this way).

Not the answer you're looking for? Browse other questions tagged transformations or ask your own question.

6
Image rotation using FFT
3
Ladder to DNA using Transformation Matrix
5
Rotating object around its own center
4
Minimum requirements to uniquely represent a 3D object in space
3
Inverse-Transpose of Vertex Normals
3
OpenGL : How to translate an object with it's own axis
1
Image warping using pixel normals
2
Correctness or otherwise of the procedure for generating an orbiting camera in WebGl
2
Composition of decomposed transformations
2
My 2D translation matrix causes the box to be off screen when it shouldnt be