Now I know this isn't the way this is normally done so please bear with me. I am doing this this way so I know I have a solid conceptual understanding of everything that goes beyond example code.

I am trying to create a simple 2D game with sprites that and rotate, move, scale etc.

I thus constructed the following matrices

I want the sprites center to move from the origin by (x, y) units

And finally I want the sprite to do all of these transformations with its center of movement being at (u, v) therefore I will plan to have to use a matrix sort of like this (you'll see why later)

So I assumed that I could combine all these matrices as follows based on code examples etc.

Great! So time to pass it in. Now Metal uses SIMD but I need my engine to be completely cross platform so instead I read the SIMD alignment guides and tried to match them with this struct:

However this doesnt work. Depending on how I have messed with things the square is either wildly off screen or doesn't translate to the (x, y) at all.

And yes my world matrix is VERY thoroughly tested and you will see in a bit that it is wrong even without that value. 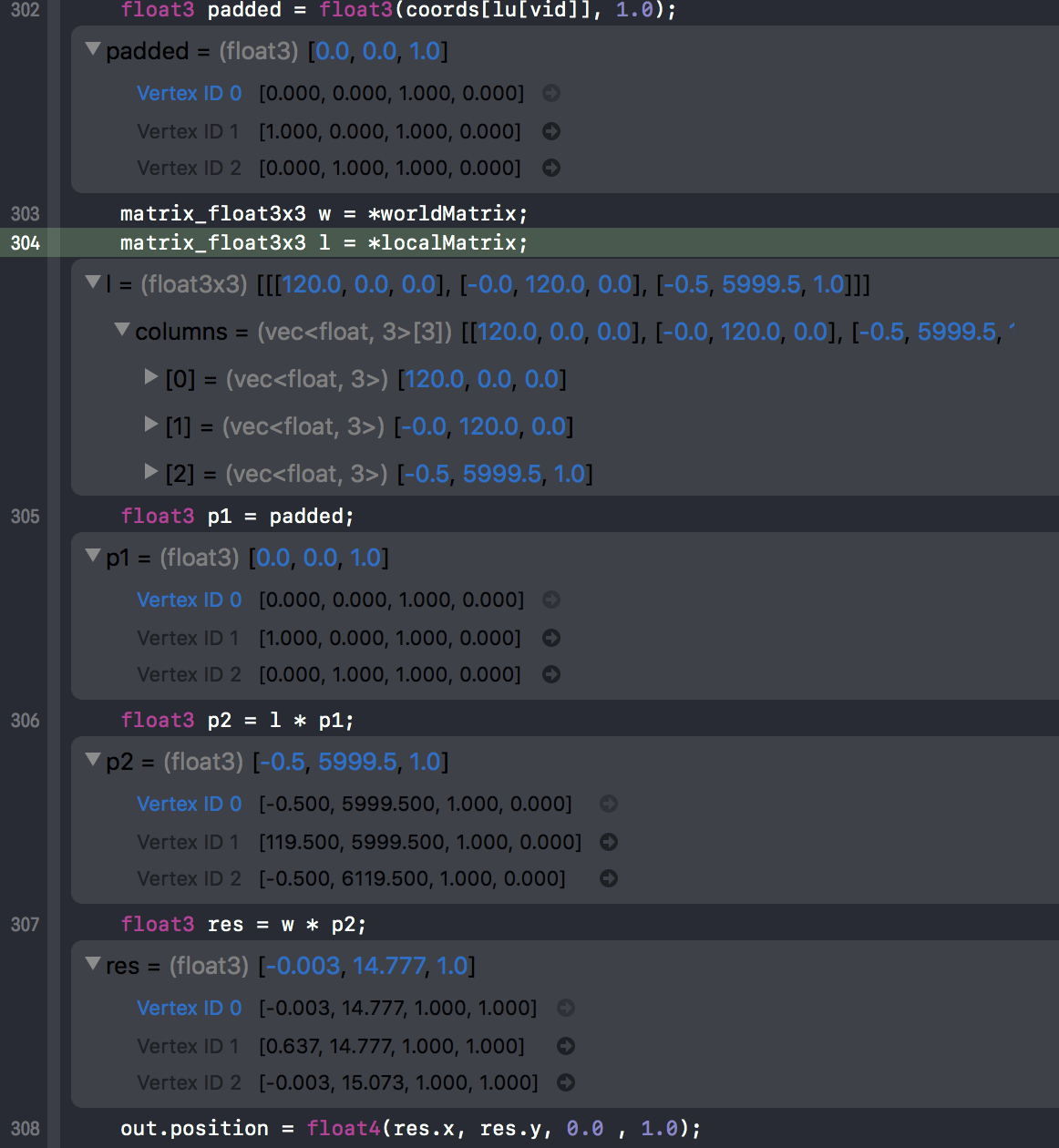 My inclination based on seeing these results is that the matrix I am passing in is wrong. But I dont know another way to do that math.

I have also tried tweaking things like switching rows and columns changing multiplication order to no avial. The closest I have gotten was something that rotated and scaled but did not move and one that moved but had sheering effects.

There are a lot of places in this process that I could have gone wrong (initial matrices, matrix multiplication\order, matrix struct, vertex shader, etc) and I would really appreciate your help finding it as I have spent awhile on this now.

The mistake was in the multiplication order during the composition of the matrices.

Since the OP was working with column vectors the correct order for transformations should have been $TRSA∗v$. The OP did the other way around, $ASRT*v$ thus the incorrect results.

Hence the correct composition should be, $TA^{\prime}RSA*v$ or $A^{\prime}TRSA*v$ depending on whether the translation is intended around $u,v$ or the origin.

Not the answer you're looking for? Browse other questions tagged transformations matrix 2d 2d-graphics or ask your own question.