Why are normal maps blue and purple in color?

I am learning about normal mapping. I understood that RGB values are converted into XYZ, but my question is how is it converted and why is the normal map blue and purple in color?

Only tangent space normal maps are primarily blue. This is because the colour blue represents a normal of (0,0,1) which would be an unchanged normal when the triangle lies in the plane x and y, i.e. perpendicular to the surface. The tangent, x and bi-tangent, y (also referred to as bi-normal) are encoded in the red and green channels and these form to create the a tangent space normal for a point on the surface of the triangle.

If a tangent space normal map was to encode a colour only in red (1.0, 0.0, 0.0) this would generate a tangent-space normal parallel to the triangle surface. This is never seen because it would mean that the triangle would only ever be lit at 90degrees from the surface and view vector at which point you wouldn't be able to see the triangle anyway.

World space normal maps encode the unit normal over a sphere so can be primarily different colours once encoded from [-1, 1] to [0, 1] per channel.

A comparison can be seen here: 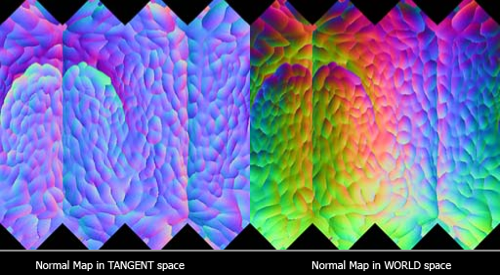 In practise normal maps are usually encoded in a 2 channel format such as BC5 which actually only stores the x and y with the z being reconstructed as we know it's a unit vector. This allows you to maintain higher precision with more bits without increasing the file size.

Because a normal map is covering vectors from -1 to 1 it makes sense to stretch this range into 0->1 so all of it can be fit inside the range of RGB.

So usually we apply a transform on the normal to convert it into something we can see.

The blue colour is because normal maps are supposed to be used relative to the primitive (triangle/etc) normal with a default (0,0,1) direction to indicate no deviation from the triangle normal. Usually the fragment shader needs to rotate this normal in relation to the current per-pixel normal at runtime.

4
How could I use bent normal map
2
How to blend World Space Normals
4
Screenspace Normals - Creation, Normal Maps, and Unpacking
2
Multiplication of SH coefficient sets representing occlusion and color
3
How to adapt diffuse/GI light mapper to directional light maps?
13
Derivative maps vs. Tangent Space Normal maps
7
Confused about prefiltering environment maps (Manson 16)
1
Difference between using + and * operator after tex2D to add albedo color?
2
how many watts are in the SPD of the color white?