I am using the book Ray Tracing from the Ground Up by Kevin Suffern to build my first ray tracers in Java. Based on the theory, I expected that direct illumination and simple path tracers render the same scene equally bright (that is, when the resulting images are more of less converged and the path tracer only allows paths of maximal length 2). However, my implementation for a simple path tracer renders much darker images. Here is an example: 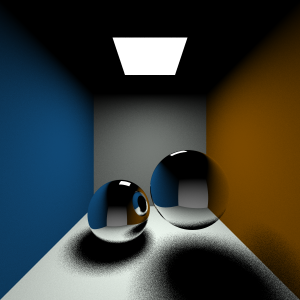 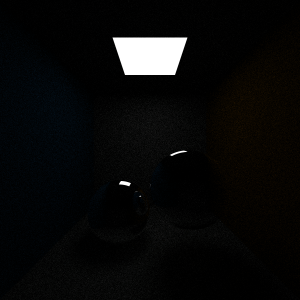 The images on the left and right are respectively the result of direct illumination and path tracing with 225 rays per pixel. My path tracer does not use next event estimation; it returns black whenever the path becomes longer than a certain length without reaching the area light. For every pixel, the received radiances are averaged afterwards.

When I manually change the sensitivity, though (i.e. a simple post rendering scaling of the colours in the image), the path traced image becomes this: 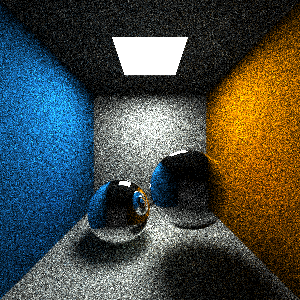 Of course, the brightened image is not near convergence, but it should at least be clear that the path tracer actually renders the same scene similarly.

Is this normal behaviour? If so, could I just pick a larger power for the light source when using a path tracer? If not, please find some relevant code of my path tracer underneath.

Here is how the cosine distributed samples are computed:

This is the shading for emissive materials. showPath returns true by default.

For reference, here is also my shading function for matte objects under direct illumination.

Note: I started to randomly change things in my code as a last desparate attempt to find the cause for my dark images. Funnily enough I found out that averaging over the square root of the number of rays per pixel (i.e. change n * n into n in the code underneath) seems to result in the correct brightness. Maybe this is a coincidence, because I don't use the number of rays per pixel anywhere else. Or maybe I'm still overlooking something.

The results that you are getting, are not correct. More specifically, your direct illumination ray tracer is not correct.

When limiting a path tracer's bounces to only allow for any direct illumination (thus only the camera ray and one bounce ray for a total of two rays), its brightness should and will match any ray tracer doing only direct illumination. Once the path tracer's bounces are extended or unlimited, it will produce brighter images since it then recovers partially or all energy that would come in through the bouncing of light.

If you compare your path tracer to your direct illumination ray tracer, you will notice that in the path tracer on the blue wall, the brightest spot is closer to the light. 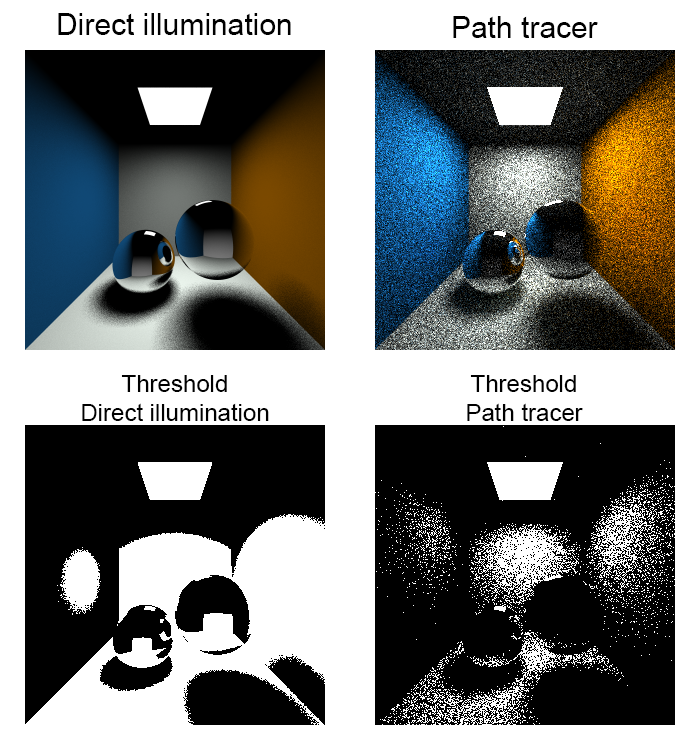 Your path tracer here is correct, and it is the direct illumination ray tracer that does not give a correct image. To find out why, let us look at the math behind a path tracer.

If we look at an example in 2D, we have a point with the hemisphere (here just half a circle) and a rectangular light (here just a line).

We see that the light takes up 30° of the 180° of the hemisphere (in 3D we would talk in area instead of degrees). If we move the light further back.

With a path tracer, this falloff is already done for you. If the light is further away, less samples would hit it and thus it contributes less.

However, with a direct illumination ray tracer or next-event-estimation, every sample will always hit the light (unless there is something blocking it). Therefore, we need to add that falloff back in. We do this by multiplying the incoming light from the area light by the falloff $1/d^{2}$.

If we rotate the area light, we would notice that it would then also take up less area on the hemisphere. This should also be accounted for, and an easy way to approximate it is using the cosine between the normal of the area light and the outgoing direction. Which you already have.

It is the not having this falloff, that makes your direct illumination ray tracer not give correct results. You would need to make the area light brighter than, because of the falloff.

If I have not missed anything else, that is all you need.

Jeroen added the code for his direct illumination ray tracer later on, and I just noticed why it is giving incorrect results. The above is still correct, yet he already had my suggested fix implemented.

When looking at his code, there is one thing that he forgot to do a few times, and that was to normalize $w_{i}$ before using it in the dot product. The dot operator only gives the cosine of the angle between the two vectors, when both vectors have a length of 1 (a.k.a. they are normalized). Jeroen forgot to do this and $w_{i}$ had a longer length than 1. Below is the code of his direct illumination ray tracer's shade function where I added some comments to make it easier to understand.

Not the answer you're looking for? Browse other questions tagged raytracing pathtracing or ask your own question.