I've been making a simple game in OpenGL, and implemented a screen fade-out using the old 'draw a black fullscreen quad and ramp up the alpha' trick. I'm doing all my shaders in linear space and using GL_FRAMEBUFFER_SRGB to automatically apply gamma. When fading out the screen I noticed that the alpha blending also becomes nonlinear - to fade to ~25% brightness I need to use an alpha of ~0.95.

I fired up Unity for comparison, and its alpha blending also seems to work this way - when rendering in linear mode most of the opacity is bunched towards the top of the alpha range.

Is this expected behaviour? Is it correct from a PBR point of view? It seems very unintuitive. As a workaround, to get more intuitive blending, would it be reasonable to apply gamma correction of 0.45 to the alpha channel before blending?

EDIT: this is the result I get after blending a .95 alpha black quad over a pure white button. It could be bad gamma on my display as Simon F suggested in the comments, but it looks a lot brighter than 5% to me.

Just turning the comments into a fully-fledged answer as it may prove useful to others.

IMHO, the alpha channel should always be linear and treated as such.

You described blending a black quad over a white background using alpha=0.95, and mapping the result back to non-linear space. We'd expect a resulting, physical intensity value of 0.05.

If your display is reasonably calibrated, you can verify this by creating, say, a 5x4 black image, setting one pixel to white, and then tiling that to a suitable size, e.g 200x200 pixels. Then draw a, say, 50x50 square in the middle and fill it with 0x3D3D3D. Here's an example: 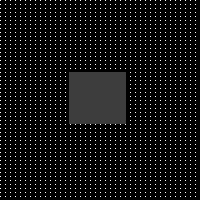 If you take a few steps back from your monitor and squint, the centre grey region and the dithered outer should be almost indistinguishable, demonstrating a correct physical model.

The problem you are describing appears to be related to the fact that our visual system is non-linear, much as our hearing is too (though probably not with the same curve). For example, the analogue volume control on a hifi amplifier will use a logarithmic potentiometer rather than a linear one .

You thus 'simply' need to change your per-frame alpha non-linearly to get a perceptually even fade out.

3
Can't make blending work
4
Alpha blending between two overlapping semi-transparent shapes
1
Is it possible to override or disable blending per pixel
2
How to perform additive blending in Metal. What do these terms mean?
3
Repeating alpha over/under operation multiple times
0
What is the relation between colour spaces and what is actually displayed on our screens?
3
Why is there a difference between the CIE XYZ colour gamut vs CIE RGB?
0
OpenGL blending with the screen