I've been working on implementing the technique from the paper "Designing look-and-feel using generalized crosshatching" which can be found at: http://dl.acm.org/citation.cfm?id=3085054

It uses the brightness of the pixel to select which texture to use, where it has source textures of varying brightness levels like in the image below. 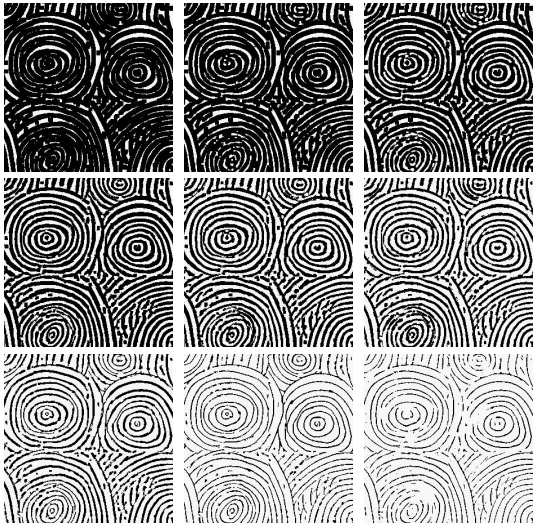 It then explains that it takes that constant color texture and applies dilation and erosion filters to obtain the darker and lighter versions of the (greyscale) texture.

My question is this: Let's say that you have a greyscale image of an artist drawing some cross hatching on a white piece of paper using a pencil. How would you convert that image to be constant average color or brightness?

The only other relevant info from the paper seems to be this:

Our texture synthesis algorithm is an extremely simple nonstationary convolution filter that consists of two stages as follows: (1) For every pixel, compute the average color in a region around the pixel where the shape of the region and weights are controlled by a user-defined kernel. (2) If the color of the region is darker than the goal color, make the color of the pixel lighter; or otherwise darker

Browse other questions tagged image-processing or ask your own question.

3
What graphics techniques can be used to simulate a color nebula effect?
3
Making low discrepancy sequence noise textures, not LDS sample positions
3
Calculate the average color of an image
4
How to shift color values of a single RGB channel
1
Artificially increase the region of interest of an image