Let's assume we have a 3D model consisted of XYZ-formatted vertices (such as point cloud model). My problem is given the position and normal of camera or camera projection (i.e. where I am looking at the points- usually given by my API), how can I extract the visible points and remove the non-visible points?

For instance here points corresponding to the black point cloud box and the back surface of the red box are removed. In point clouds, points have a size. So let's assume they have a size, say 5 pixel radius just for modeling purpose.

P.S. It doesn't have to be perfect. Just any approach to somehow remove the non-visible points so to decrease the total points with not much impact on the visible points will work.

Here is a test point cloud model to work with: https://www.dropbox.com/s/dfhyy9xa5i9o2fz/testPLY.ply?dl=0 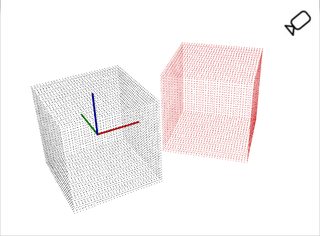 Draw an invisible mesh that will occlude the points we don't want.

This approach should give the expected result, but the problem with it is the first part, which is not trivial at all.

Approximate the mesh with fat particles, that are big enough to hide points in the background.

This method should be a lot simpler to implement than A, because there is no need to triangulate anymore. The result will not be perfect though: some points that should be visible might disappear, and some that shouldn't be visible will remain visible. Tweaking the particle diameter and offset will yield different results.

As a very cheap trick, just render the point cloud with a fog function. The farther points are from the camera, the less visible they are. This method won't hide any point, but still help reading the volume.

Conceptually simplest would be to treat it as a ray-casting problem, representing each point as a small sphere. It should work like the shadow rays in a conventional raytracer: iterate over all of your points, and for each one, trace a ray to the camera. If the ray intersects the sphere representing another point, then remove it.

If the number of points is small enough, you can do this directly, but if that's not fast enough, you should put the points into an acceleration structure such as a kd-tree. (If you need this kind of optimization, it might be best to start from an existing ray-tracer such as PBRT instead of writing it from scratch.)

If the points represent surface detections (from something like a laser scanner), you might also have the surface normal at each point, depending on the scanner technology. In this case, you might get better results by using small discs instead of spheres. That'll be more robust on faces seen at a glancing angle.

Not the answer you're looking for? Browse other questions tagged 3d computational-geometry geometry mesh normal-mapping or ask your own question.

2
Count number of green fragments that are within a given distance from each screen fragment
5
Where should I project a polygon corner when it is behind me?
4
Minimum requirements to uniquely represent a 3D object in space
3
How to correct point cloud distortion
2
Estimating the position of vertexes in a 3D model
1
Calculate normals from vertices
0
In place sorting of a half edge DS?