What is better to use for real-time computing Mesh - Plane intersection points, GPU or CPU?

I want to write plugin (library) for Unity3d (it doesn't matter which framework I will choose for this, question is ), for cutting arbitrary mesh with plane (for simplicity it will be plane for beginning). 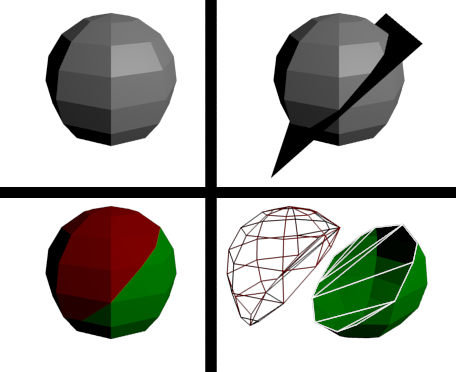 There are following steps:

1) check every triangle whether it lies above, under plane or intersected by plane, assign all vertices to VER_ABOVE or VER_UNDER lists, recalculate triangles, put them in TRI_ABOVE or TRI_UNDER lists

2) Split intersected triangles into triangle and quadrilateral, triangulate last one and put them in corresponding lists (TRI_ABOVE or TRI_UNDER)

And now the question:

Where it is better to calculate intersections, triangulation (for example I will use Constrained Delaunay Triangulation or Sweep Line Non-Convex Polygonal Triangulation cutting into monotone polygonals) and other stuff: on CPU or on GPU (using Shaders), if someone could explain me general pipeline from loading cashing mesh to memory and so on on GPU and on CPU, so I can better understand the most time consuming actions and can optimize some stuff.

I will also be thankful for sharing link on code examples calculating similar stuff.

doing the calculation to decide whether a point is on one side of a plane or the other is very simple (a single dot product). Doing that 3 times and having a special case when they don't match to split the triangle is pretty fast. It's also a parallel problem. The hardest part is reserving the space for the output.

Preparing the data to start computing this on the gpu is already enough overhead that it's not worth doing it on the gpu unless the mesh is very big or you are splitting it multiple times (due to the plane moving for example). Or the data is already in good enough condition to be sent over to the gpu directly through DMA without the cpu needing to touch it at all.

Not the answer you're looking for? Browse other questions tagged shader real-time mesh triangulation tesselation or ask your own question.

4
Weird rendering in rectangle mesh shader AKA Why has my basic shader become a modern art generator?
2
Real time image based lighting for arbitrary BRDFs coordinate alignment
7
What is this triangle sub-division scheme called?
2
GPU not reaching 100% usage when frame rate is dropping
0
What is performance better - add four materials to mesh or duplicate every vertex and use packed texture?
0
Tessellation Controll Shader how to get maximum subdivisions limit?