I've been doing OpenGL tutorials using LearnOpenGL. Currently I'm reading about Stencil Buffers and in his example he uses a Stencil Buffer to draw an outline around an object. I've also read that it can be used to create shadows and reflections. My question is, what are other practical uses for a Stencil Buffer and why were they invented in the first place?

The original use for the stencil buffer was for non-3D content. Say you're making a 3D game. Most of the screen is the 3D content, but you also have some GUI around the outside which is not drawn through OpenGL but through a 2D canvas API. You can mask off the shape of the 2D GUI using the stencil buffer, and then make sure that your 3D/OpenGL content won't affect it and won't cause overdraw (which wastes fragment shading time).

As you've seen, it's also used for techniques like shadow volumes and some reflection techniques. In general, it can be used for techniques where you draw an object and then want to run another fragment shader (or some more draw calls) to alter that object's appearance, by adding reflections, lighting, or screen-space effects. In that case, when you draw the object the first time, it's very cheap to fill the stencil buffer at the same time. Then, your later pass (to add the reflections or whatever) can use the stencil test to only run on those fragments that eventually did get drawn on the screen.

Another common use is when rendering a scene in multiple parts. For example, in a flight simulator, it's common for the cockpit (and aircraft exterior) and the terrain (and other aircraft) to be done in completely separate passes. This lets you use a lower-precision depth buffer without causing z fighting, because you can use different depth ranges for the near content and the far content. But if you do this, you can't reuse the same depth values for both passes. In this case, you can fill the stencil buffer when you're drawing the cockpit, and use the stencil test to avoid overdrawing the cockpit when you draw the terrain. (You need to do more to handle glass effects on the cockpit windows: this description is an oversimplification.) You can use similar techniques for drawing the player's weapon and/or hands in first-person shooters.

Another use, that I think Dan didn't mention, is for filling non-convex polygons, e.g, 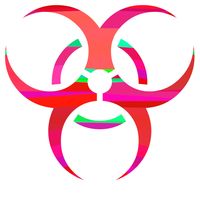 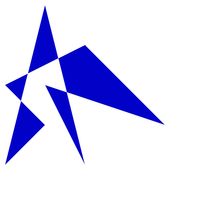 The stencil can be used to implement the fill rule which is typically either odd/even (as used in these examples) or non-zero, simply by, say, treating the list of vertices as a triangle fan or, with reordering, a triangle strip, and setting the stencil appropriately. Finally an enclosing object is drawn but restricted to just those pixels that match the appropriate rule. One catch, if you use the non-zero rule, is that you don't want to "overflow" the max stencil value.

33
What is a stencil buffer?
8
Writing to a compressed texture using a compute shader, with no extra copies
12
OpenGL - Detection of edges
3
Incorrect values written in stencil buffer
8
What is a good approach for handling uniforms in modern OpenGL?
1
Can you batch vertex data and still sort by depth?
3
Shader storage buffer indexing by 4 bytes instead of 3?
0
Efficiently drawing multiple instances of 3D objects
1
Problem using Decaling with Stencil to avoid Z-fighting