This article by Nvidia confuses me even more by using sentences as "when a texel is trapezoidal" or "anisotropic filtering scales either the height or width of a mipmap by a ratio relative to the perspective distortion of the texture". Trapezoidal texel? Scaling a MIPmap? What does this even mean?

Could you help me grasp how AF and AF levels work?

Please note that my goal is NOT to have an OpenGL or DirectX AF implementation, but rather to grasp how AF works from a high-level perspective.

To understand the nature of anisotropic filtering, you need to have a firm understanding of what texture mapping really means.

But these fragments are not pixel-sized relative to the texture. Imagine if our rasterizer generated a texture coordinate for each corner of the fragment. Now imagine drawing those 4 corners, not in screen space, but in texture space. What shape would this be?

If you were doing texture accessing correctly, the way to get the texture color for a fragment would be to figure out what this rectangle is. Then fetch every texel from the texture within that rectangle (using coverage to scale colors that are on the border). Then average them all together. That would be perfect texture mapping.

It would also be exceedingly slow.

In the interest of performance, we instead try to approximate the real answer. We base things on one texture coordinate, rather than the 4 that cover the entire fragment's area in texel space.

Mipmap-based filtering uses lower-resolution images. These images are basically a shortcut for the perfect method, by pre-computing what large blocks of colors would look like when blended together. So when it selects a lower mipmap, it is using pre-computed values where each texel represents an area of the texture.

Anisotropic filtering works by approximating the perfect method (which can, and should, be coupled with mipmapping) through taking up to a fixed number of additional samples. But how does it figure out the area in texel space to fetch from, since it's still only given one texture coordinate?

Basically, it cheats. Because fragment shaders are executed in 2x2 neighboring blocks, it is possible to compute the derivative of any value in the fragment shader in screen-space X and Y. It then uses these derivatives, coupled with the actual texture coordinate, to compute an approximation of what the true fragment's texture footprint would be. And then it performs a number of samples within this area.

Here's a diagram to help explain it: 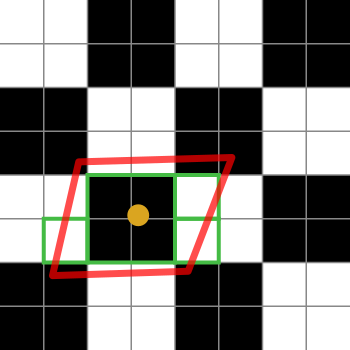 The black-and-white squares represent our texture. It's just a checkerboard of 2x2 white and black texels.

This particular diagram suggests that an implementation might access 4 texels. Oh yes, the green boxes cover 7 of them, but the green box in the center could fetch from a smaller mipmap, thus fetching the equivalent of 4 texels in one fetch. The implementation would of course weight the average for that fetch by 4 relative to the single texel ones.

If the anisotropic filtering limit was 2 rather than 4 (or higher), then the implementation would pick 2 of those samples to represent the fragment's footprint.

A few points that you probably already know, but that I just want to put out there for others reading this. Filtering in this case refers to low-pass filtering like you might get from a Gaussian Blur or a box blur. We need to do this because we are taking some media that has high frequencies in it, and rendering it into a smaller space. If we didn't filter it, we would get aliasing artifacts, which would look bad. So we filter out the frequencies that are too high to be accurately reproduced in the scaled version. (And we pass the low frequencies, so we use a "low pass" filter like a blur.)

So let's think about this first from the point of view of a blur. A blur is a type of convolution. We take the convolution kernel and multiply it by all the pixels in an area and then add them together and divide by the weight. That gives us the output of one pixel. Then we move it over and do it again for the next pixel over, and again, etc.

It's really expensive to do it that way, so there's a way to cheat. Some convolution kernels (particularly a Gaussian blur kernel and a box blur kernel) can be separated into a horizontal and vertical pass. You can filter everything with just a horizontal kernel first, then take the result of that and filter it with just a vertical kernel, and the result will be identical to doing the more expensive calculation at every point. Here's an example: 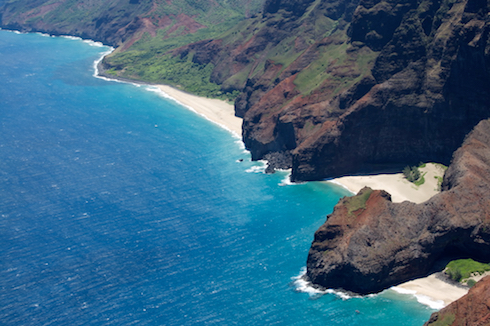 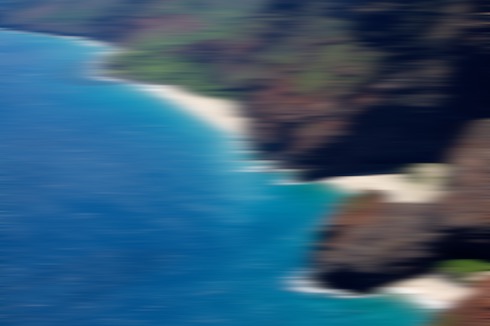 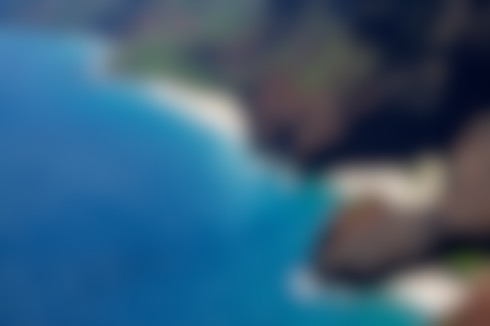 So we can separate the filtering into a vertical and horizontal pass. So what? Well, it turns out that we can do the same thing for spatial transforms. If you think about a perspective rotation, like this: 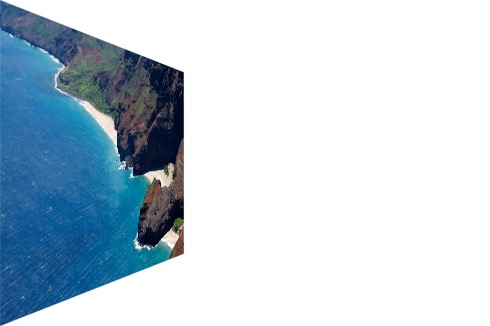 It can be broken down into an X scale: 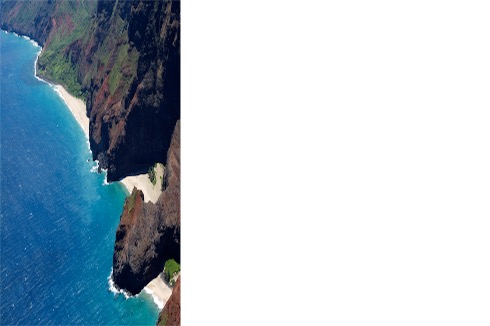 followed by a scale of each column by a slightly different amount: 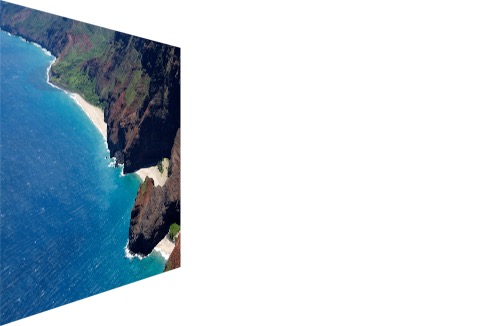 The word "anisotropy" comes from the greek "an" meaning "not", "isos" meaning equal, and "tropos" meaning "direction". So it means "not equal in all directions." And that's exactly what we see - the scaling and the filtering are done in different amounts in each direction.

Not the answer you're looking for? Browse other questions tagged opengl texture filtering directx mipmap or ask your own question.