Is there a difference between window and screen in computer graphics?

I've been reading some code which setups a ray tracer and I've realized I've a doubt regarding what's a screen and what's a window in this context. Here's the relevant code using Qt:

I think I know what's the screen resolution: if we think of the screen as a matrix, w and h would be respectively the number of columns and rows in this "matrix".

Then we compute X, which is half of the horizontal window (according to the comments in the code). (Note this X is not the same X representing the x axis in the picture below. Yes, whoever wrote this code had no common sense!)

Now, mathematically I understood these calculations, what I don't understand is the difference between $2X$ and $w$.

Is the "window" here the same thing as "screen"? 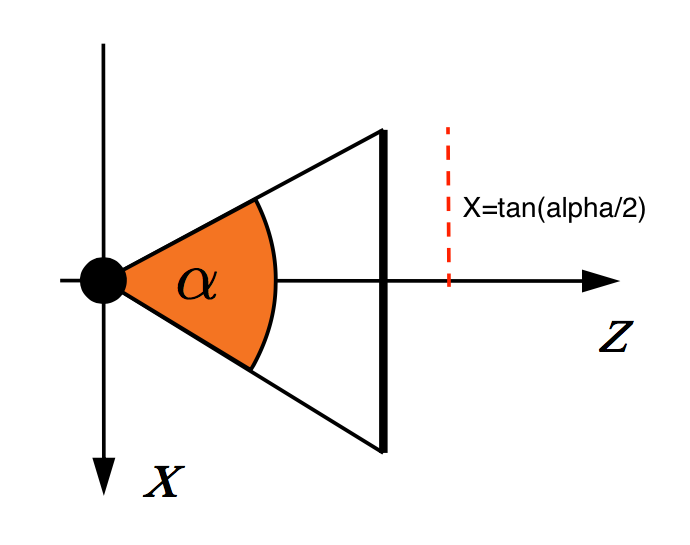 If the window is the same thing as the screen, I wonder why do we need $w$. I mean, couldn't we just decide how many rows and columns we have in the visible area?

Again, it's not clear if the visible area of the camera is the same thing as the screen or window...

In this code, the "screen resolution" means the number of pixels in the output image (which happens to be a window in the windowing system), while the "window dimension" means the corresponding size in the 3D scene. Computing s tells you the ratio between one unit of 3D space in your scene and one pixel of output image. You need to do this in order to know how far apart in world-space to cast your primary rays.

These uses of "screen" and "window" aren't standard; they're specific to this code. No wonder you're confused.

You have two issues at stake here:

So does your question relate to "what do these terms mean in the context of my program" or "what do they mean in CG"? It seems like you're more interested in the former. 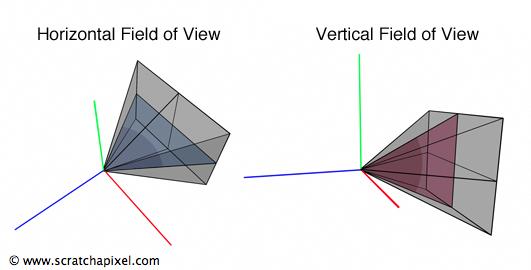 Imagine that the image plane (the base of the pyramid) is 1 unit away from the apex. By changing the size of this image plane which you do by changing the field-of-view angle as shown in the image above, you can control how much of the scene you see (this is equivalent in photography to zooming in or out).

Understand that all these concepts might take time and can't be properly explained in just a few lines. I would recommend additional sources for you to look at and really understand and learn about the different coordinate systems that are used and involved in the process of simulating physical cameras in computer graphics.

Just leaving my opinion here in case someone else comes searching for the answer.

Different rendering systems have different definitions for screen space i guess. According to Renderman Screen Space means coordinates in the range [-1,1] where as other systems such as OpenGL thinks of it as Pixel coordinates ranging from 0 or 1 to the width/height of the actual screen.

In CG, before converting all the points to the actual pixel coordinates i.e where they are projected on the screen, we usually normalize all the points in the range [0,1] or [-1,1]. This is known as the Normalized device coordinates. It's done because it's easier to scale it back to screen size that may vary and it's usually easier to perform other calculation in this range.

I think the coder there was just trying to do that.

Dunno about the fancy stuff but here the Y range has been mapped to [-a,a] where a is the aspect ratio. which is width/height or height/width. You can see that clearly if you substitue the value of "s" in the final equation. You'll get

6
How to convert a thread ID into Screen Space Coord in an OpenGL Compute Shader?
7
Ray tracing scene with 2 lights and sphere
5
How to rasterize a line when the background color is not always white?
3
Efficiently sampling specific surfaces using MIS in path tracing
12
Difference between BVH and Octree/K-d trees
0
Perspective Raytracing
1
Path tracing - cannot converge diffuse sampling + oversaturation