Is there a way to draw spherical objects without triangles?

It seems that in all existing graphics libraries, 3D objects are always described in terms of triangles. Drawing triangles can be implemented very efficiently on video hardware and since any 3D object can be approximated with triangles, triangles are the only basic element needed. Triangles can be represented by 3-tuples and are simple to work with.

Raytracing is a great way to render spheres as Daniel mentioned. Below is a screenshot of a raytraced scene I made but lost the source code to unfortunately. 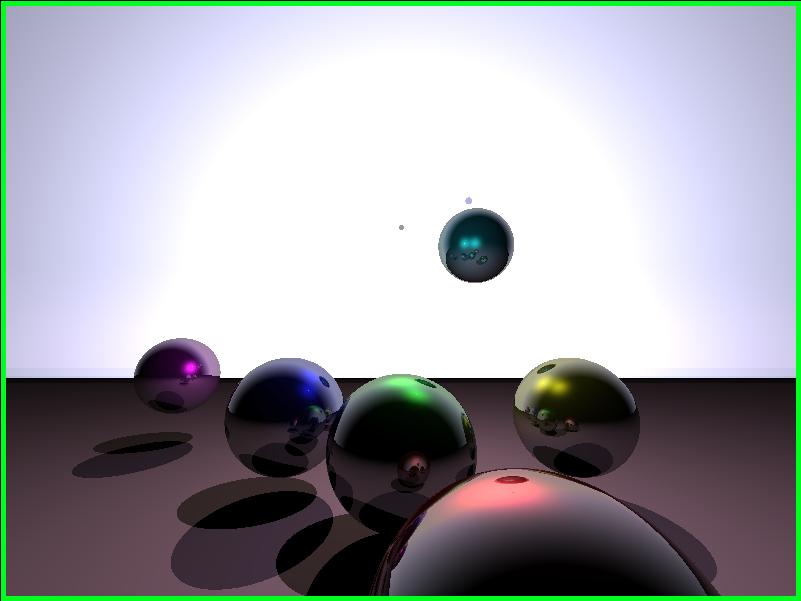 If you are looking to render smooth / non polygonal objects in general, it's not always easy, desired or even possible to do an analytical solve for ray vs object.

For these cases, a useful technique is something called "ray marching" (also called sphere tracing). In ray marching, you take steps down a ray and at each point ask if you are inside or outside of the object (alternately, above or below). When the answer changes, you know that the intersection of the ray occurred between the current and last point you tested on the ray.

Once you know the intersection occured between those two points, you can do various things to try and find the actual intersection, depending on quality needs vs computation costs. Some common techniques:

Note that you can get an estimated signed distance numerically using finite differences and using the gradient. Check this link for more info on that: http://www.iquilezles.org/www/articles/distance/distance.htm

With a signed distance estimating function, you can also use the gradient to get the normal, which is required for shading.

Below is a ray marched surface that is defined as a function $z=f(x,y)$, and is a screenshot of this webgl2 interactive demo: http://demofox.org/LeastSquaresSurfaceFit.html 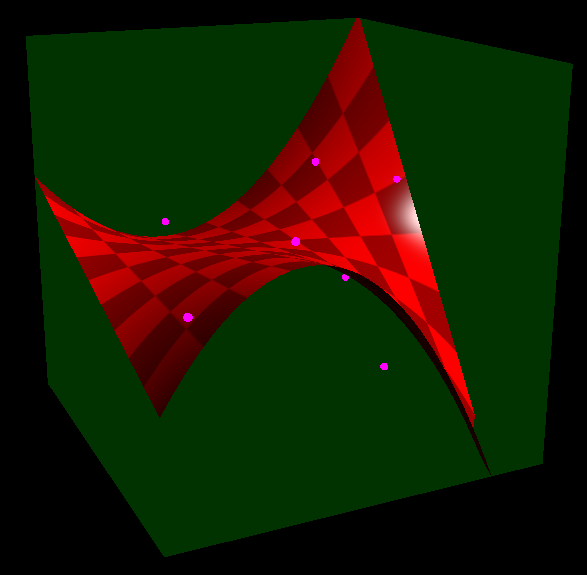 Alternately, here's a shadertoy which ray marches a cubic bezier rectangle - it's cubic on each axis, so is degree(3,3): https://www.shadertoy.com/view/4tfXz2

Back to talking about rendering spheres, you can also just rasterize a sphere as a 2d circle (possibly distorted by a view / projection matrix type setup in "2d"), and then shade it as if it was a 3d object. It can also work for non spheres, and you see this a lot with renderings of metaballs.

Below is a screenshot of this shadertoy which renders metaballs: https://www.shadertoy.com/view/4sXXWM 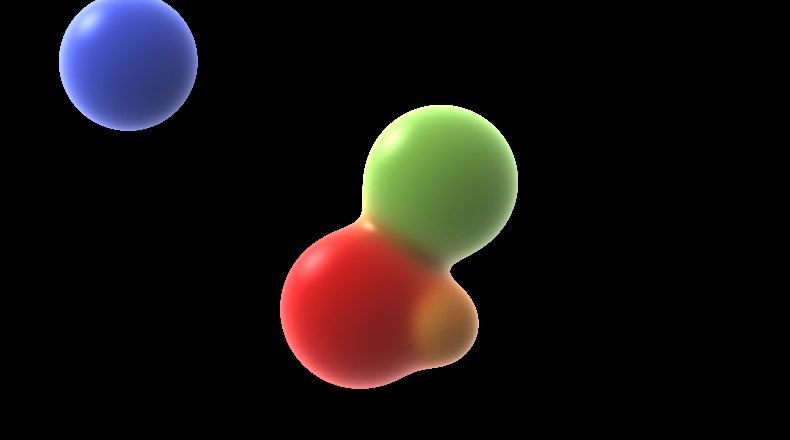 Lastly, I wanted to mention that all of these techniques are compatible with traditional renderers as well. Like Daniel said, you can draw a screen space billboard that is larger than the shape (or draw a world space scaled and oriented unit cube that contains it) and then you do your raytracing, raymarching, or rasterization / fake 3d lighting within the pixel shader, to mix these techniques with standard rasterization rendering methods.

A standard technique is to use a ray/sphere intersection test inside a pixel shader. One draws a billboard large enough cover the area the sphere could appear on the screen (or drawing a bounding cube) to reduce the number of wasted intersection tests (other geometric shapes could be used). The fragment is killed if the intersection test fails; if an intersection occurs, the appropriate depth value is calculated in the pixel shader and output for further visibility tests.

Not the answer you're looking for? Browse other questions tagged shader 3d or ask your own question.

5
Graphics Pipeline: Viewspace & Back face culling incorrectly
6
B-Spline patches on the tessellation shader. How to get the control points
4
Is a single shader and 1x1 pixel white sampler more efficient than frequent switching between shaders with and without samplers?
0
transformation from cartesian coordinates to spherical coordinates without calculations
2
OpenGL - Recreate position in viewspace from depth values
1
Is there a way to compile part of a shader into a spirv?