I am trying to get the screen space position of each pixel in a texture on a mesh and write it into a texture. I was hoping to use a compute shader to do this:

In the above code (lump of comments) I can tell that I am going to run into some problems. The VertexData struct contains mesh data per vertex, but I want to run a thread for each pixel in a texture and then figure out what my pixels position is on a triangle. In a regular shader, this would be interpolated from the vertex shader when using data in the fragment shader, but from my little knowledge of compute shaders, this would require something extra. In the back of my mind I feel like its going to end up being something to do with Barycentric coords, but I just can't put my finger on it!

A picture is worth a thousand words: 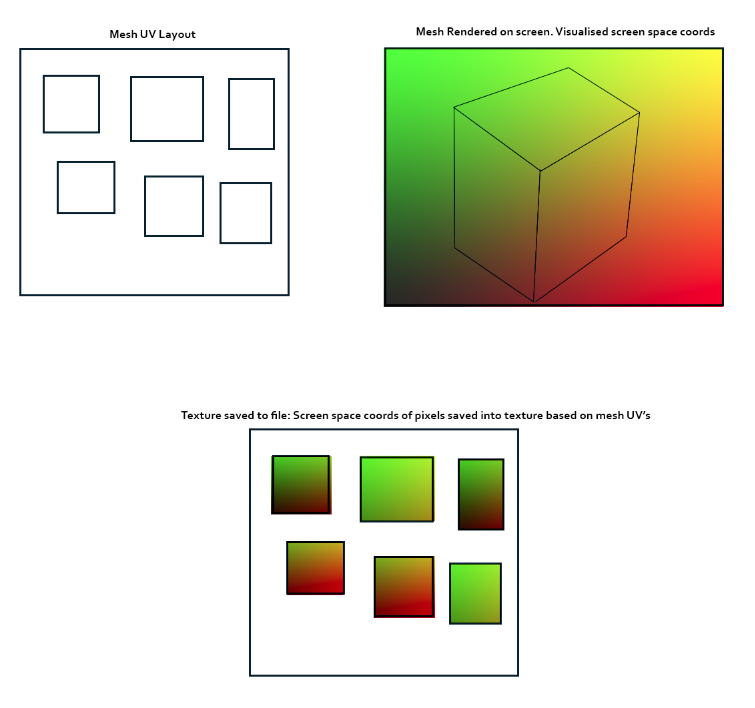 The desired end result is a texture mapped to the UV coords of a mesh, storing the screen space positions of each pixel on the mesh. If there is a better way of tackling this, please let me know!

You seem to do things more complicatedly than you need to, as adressed in the comments. What you actually want to do is simple the opposite of the normal render flow. Rather than drawing your mesh in world space and mapping the texture into it, you draw it in texture space and map its vertices onto it and let your graphics hardware worry about interpolation. I'll give the general outline here, as I honestly don't know the actual DirectX terms for the stuff here, but it should be easy to map onto real HLSL if you know your way around DirectX (which I'm sure you do when messing with Compute Shaders).

You basically render into your output texture using an offscreen render target. You then render your mesh using its texture coordinates as positions rather than its model space vertices, which you just pass through to the pixel shader, where you finally transform them into screen space and write out as the pixel's colour:

Feel free to adjust this to the realities of proper DirectX screen-space transformations and matrix multiplication orders, but the general idea should be clear.

20
Why is this conditional in my fragment shader so slow?
6
How to convert a thread ID into Screen Space Coord in an OpenGL Compute Shader?
5
In a shader, how to store fragment coordinates in a spatial partitioning from one pass to the next?
8
Label Placing for thousands of objects with OpenGL
4
Register pressure in Compute Shader
1
Help with wireframe artifacts on mesh procedural UV texturing