So, I started writing my second raytracer - this time focusing on photometric rendering that uses IES lights and standard photometric units. I've got the basic raytracing up and running (using pure geometry), I've read any article I could found on radio- and photometry (I think I developed an intuition for it) but the issues started when I tried to validate/play with the underlying math.

I use IES lights as a function of spherical coordinates that gives me the intensity of light in that direction in candelas (lumens per unit solid angle). Also in the equation for Luminance/Radiance there are differential solid angle and differential surface area. On the paper everything looks good, however:

My question is: how should I deal with those parameters in my raytracer? I assume (but I'm not sure) that my (differential) solid angle is just a (unit) vector in descrete world and the surface area is simply a point - but what values should I plug in to those equations? I saw that on some websites that people just ignored those terms and replaced the integral with sum - but no explanation was given...

And my second question is related to those IES lights - how can I simply convert intensity to radiance? The intensity already has the solid angle, but for radiance I need the surface area... Or should I somehow integrate the luminious intensity to get luminious flux and then somehow calculate the radiance from that.

EDIT: I decided to try to grab a sheet of paper, try again and share with you my thought process. In order to simplify a lot of things:

So with those in mind let's imagine that we have following scene: 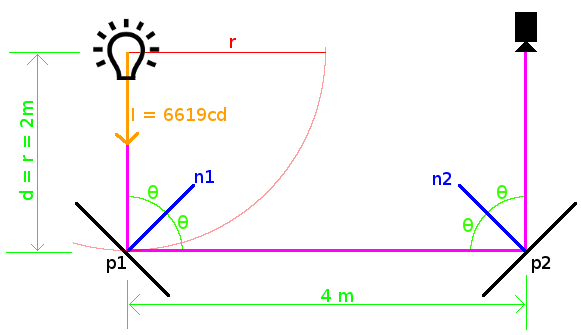 I also would like to apologize for making this question sooo long - but I had never taken any course that would introduce radiometry and I was forced to (try to) learn it by myself.

You have a lot of questions so let me take a shortcut and just try to explain how this is properly done (:

What you are interested in calculating is luminance (cd/m^2) for a pixel. A simple way you can do this is by using brute-force Monte Carlo integration over the hemisphere defined by the normal of a pixel, i.e. cast few thousand randomly distributed rays over the hemisphere. For each of those sample rays you evaluate the BRDF (1/sr) and multiply it with the luminance of the area light source the ray hits, or 0 if it doesn't hit anything. Sum up all these results and multiply by 2*pi/num_samples in the end, i.e. by the solid angle of each sample.

This operation gives you the the luminance for the pixel, which you then multiply by camera exposure factor to map to a proper range which you can tone map, i.e. calculate EV100 from camera aperture, shutter time and ISO-settings as follows:

And then calculate exposure factor:

For IES light profiles you can normalize the profile and modulate light luminance with the IES factor for the given direction the ray hits the light.

Not the answer you're looking for? Browse other questions tagged raytracing lighting or ask your own question.

4
What is the effect of the BRDF denominator?
5
Radiance at a nearly perpendicular angle is almost infinite?
2
How can we convert a probability density according to solid angle to a density according to area?
5
What is the purpose of the projected solid angle $dA^\perp$ term in the definition of Radiance?
1
Confusion about light PDF
4
Deriving radiance from irradiance and intensity