How is Gaussian Blur Implemented?

I've read that blur is done in real time graphics by doing it on one axis and then the other.

I've done a bit of convolution in 1D in the past but I am not super comfortable with it, nor know what to convolve in this case exactly.

Can anyone explain in plain terms how a 2D Gaussian Blur of an image is done?

I've also heard that the radius of the Blur can impact the performance. Is that due to having to do a larger convolution?

In convolution, two mathematical functions are combined to produce a third function. In image processing functions are usually called kernels. A kernel is nothing more than a (square) array of pixels (a small image so to speak). Usually, the values in the kernel add up to one. This is to make sure no energy is added or removed from the image after the operation.

Specifically, a Gaussian kernel (used for Gaussian blur) is a square array of pixels where the pixel values correspond to the values of a Gaussian curve (in 2D). 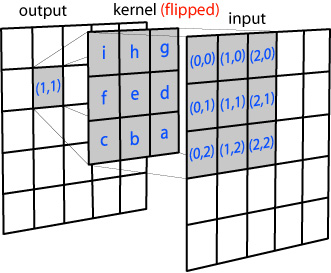 To answer your first question, as explained above, convolution can be done by multiplying each input pixel with the entire kernel. However, if the kernel is symmetrical (which a Gaussian kernel is) you can also multiply each axis (x and y) independently, which will decrease the total number of multiplications. In proper mathematical terms, if a matrix is separable it can be decomposed into (M×1) and (1×N) matrices. For the Gaussian kernel above this means you can also use the following kernels:

You would now multiply each pixel in the input image with both kernels and add the resulting values to get the value for the output pixel.

For more information on how to see if a kernel is separable, follow this link.

Here is the best article I've read on the topic: Efficient Gaussian blur with linear sampling. It addresses all your questions and is really accessible.

So for a $n \times n$ size ($O(n^2)$), you only need to evaluate $2 \times n$ values ($O(n)$), which is significantly less. If your operation consists in reading a texture element (commonly called a "tap"), it is good news: less taps is cheaper because a texture fetch has a cost.

In general, a convolution is performed by taking the integral of the product of two functions in a sliding window, but if you're not from a math background, that's not a very helpful explanation, and certainly won't give you a useful intuition for it. More intuitively, a convolution allows multiple points in an input signal to affect a single point on an output signal.

Since you're not super comfortable with convolutions, let's first review what a convolution means in a discrete context like this, and then go over a simpler blur.

In our discrete context, we can multiply our two signals by simply multiplying each corresponding sample. The integral is also simple to do discretely, we just add up each sample in the interval we're integrating over. One simple discrete convolution is computing a moving average. If you want to take the moving average of 10 samples, this can be thought of as convolving your signal by a distribution 10 samples long and 0.1 tall, each sample in the window first gets multiplied by 0.1, then all 10 are added together to produce the average. This also reveals an interesting and important distinction, when you're blurring with a convolution, the distribution that you use should sum to 1.0 over all its samples, otherwise it will increase or decrease the overall brightness of the image when you apply it. If the distribution for our average had been 1 over its whole interval, then the total signal would be 10x brighter after the convolution.

Now that we've looked at convolutions, we can move on to blurs. A Gaussian blur is implemented by convolving an image by a Gaussian distribution. Other blurs are generally implemented by convolving the image by other distributions. The simplest blur is the box blur, and it uses the same distribution we described above, a box with unit area. If we want to blur a 10x10 area, then we multiply each sample in the box by 0.01, and then sum them all together to produce the center pixel. We still need to ensure that the total sum of all the samples in our blur distribution are 1.0 to make sure the image doesn't get brighter or darker.

A Gaussian blur follows the same broad procedure as a box blur, but it uses a more complex formula to determine the weights. The distribution can be computed based on the distance from the center r, by evaluating $$\frac{e^{-x^2/2}}{\sqrt{2\pi}}$$ The sum of all the samples in a Gaussian will eventually be approximately 1.0 if you sample every single pixel, but the fact that a Gaussian has infinite support (it has values everywhere) means that you need to use a slightly modified version that sums to 1.0 using only a few values.

Of course both of these processes can be very expensive if you perform them on a very large radius, since you need to sample a lot of pixels in order to compute the blur. This is where the final trick comes in: both a Gaussian blur and a box blur are what's called a "separable" blur. This means that if you perform the blur along one axis, and then perform it along the other axis, it produces the exact same result as if you'd performed it along both axes at the same time. This can be tremendously important. If your blur is 10px across, it requires 100 samples in the naive form, but only 20 when separated. The difference only gets bigger, since the combined blur is $O(n^2)$, while the separated form is $O(n)$.

The most important thing to consider when implementing the Gaussian blur is, as others have pointed out, to separate the 2D convolution filter into two 1D convolutions because it brings the complexity down from $O(n^2)$ to $O(n)$.

But there are two more tricks you might want to consider in an actual implementation:

The filter has a certain radius and because of that, at the very borders, you will need to calculate with pixels which fall outside of the image. In such case, you could try one of the following: for the outside pixels you simply take the last possible value (i.e. the pixel at the very border, as in max(x, 0). Or you could "reflect" the image towards outside (as in x < 0 ? -x : x). Or you could simply stop at the border but then you would need to adjust the denominator in convolution filter so that it sums up to 1. For example:

11
How is Depth of Field Implemented?