Why random monte carlo sampling instead of uniform sampling?

Why is it that it's so common to use monte carlo randomized sample locations, instead of uniform sampling?

I'm assuming that taking randomized samples gives some benefit but I don't know what they could be.

Sample locations with a uniform pattern will create aliasing in the output, whenever there are geometric features of size comparable to or smaller than the sampling grid. That's the reason why "jaggies" exist: because images are made of a uniform square pixel grid, and when you render (for example) an angled line without antialiasing, it crosses rows/columns of pixels at regular intervals, creating a regular pattern of stairstep artifacts in the resulting image.

Supersampling at a finer uniform grid will improve things, but the image will still have similar artifacts—just less badly. You can see this with MSAA, as in this comparison image from an NVIDIA presentation on temporal antialiasing: 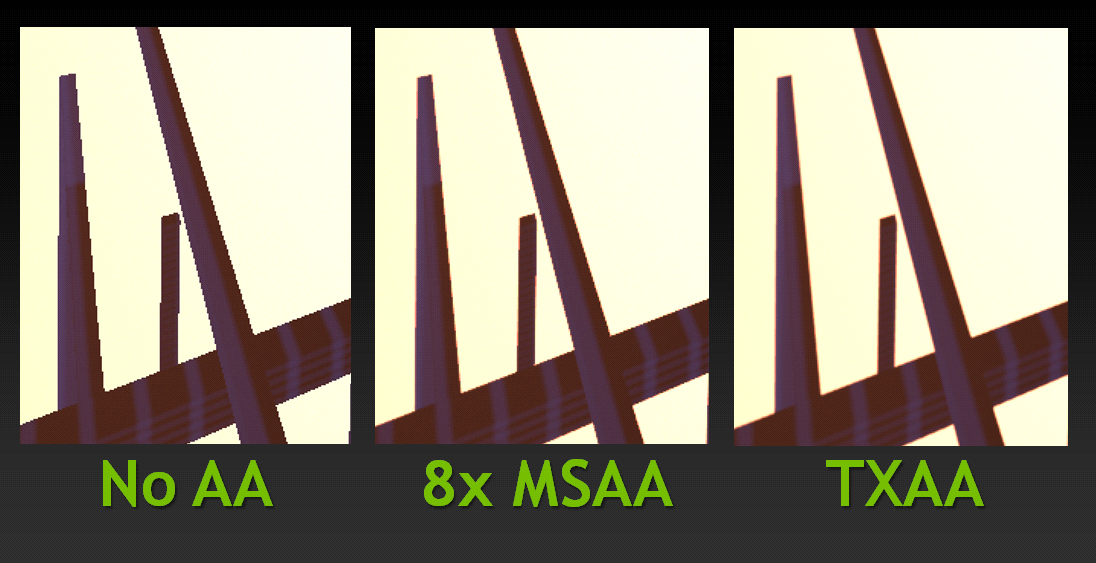 The 8x MSAA image (which is not quite a grid but still has a repeating pattern) still plainly has jaggies in it, although they're antialiased jaggies. Compare to the TXAA result, which both has a higher effective sample count (due to temporal reuse) and uses a Gaussian rather than box filter for accumulating the samples.

On the other hand, random sampling produces noise instead of aliasing. There is no pattern to the sample locations, so no pattern to the resulting errors. Both aliasing and noise are errors due to not having enough samples to form a clean image, but arguably noise is the less visually-objectionable artifact.

On the other other hand, perfectly random sampling (in the sense of i.i.d. random variables) tends to exhibit a certain level of clumping. Purely by chance, some areas in the domain will have denser-than-average clumps of samples, and other areas will be lacking in samples; those areas will be, respectively, over-represented and under-represented in the resulting estimate.

The convergence rate of the Monte Carlo process can often by improved by using things like stratified sampling, low-discrepancy sequences, or blue noise. These are all strategies to generate "de-clumped" samples that are spaced out a bit more evenly than i.i.d. samples, but without creating any regular patterns that might lead to aliasing.

Monte Carlo methods rely on the law of large numbers, which states that the average of a random event repeated a large number of times converges toward the expected value (if you flip a coin a gazillion times, on average you will obtain each side half the time). Monte Carlo integration uses that law to evaluate an integral by averaging a large number of random samples.

Using a uniform distribution would break the algorithm because the law it is based upon wouldn't apply anymore.

Not the answer you're looking for? Browse other questions tagged sampling monte-carlo integral or ask your own question.

19
How do correlated samples influence the behavior of a Monte Carlo renderer?
6
Speeding up convergence: am I reinventing the wheel?
12
What is the fundamental reasoning for anti aliasing using multiple random samples within a pixel?
2
Troubleshoot half vector sampling from a distribution (cook-torrence, trowbridge-reitz, etc)
3
Making low discrepancy sequence noise textures, not LDS sample positions
3
Ask for help on understand an algorithm which combines stratified sampling and importance sampling of Monte Carlo
2
Naive Path tracer produces much darker images than Explicit light sampling
1
Monte Carlo Importance Sampling