Why does checkerboard pattern on a computer screen appear with a yellowish tint?

This question was originally asked on Physics, then moved to Cognitive Sciences. 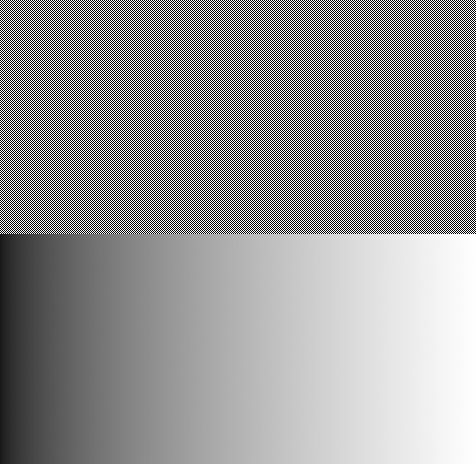 You might want to display the image in a new page, in case it gets resized for mobile displays.

On the top half, there is a pixel-sized checkerboard pattern with alternating black and white pixels; on the bottom half, there's a black to white gradient. Now, I don't know if you see the same, but for me, when viewing from distance or defocusing my eyes and the top half blending into one color, I can't find any color in the gradient below which would match it.

With simple arithmetics, I would guess at first guess the resulting color be either RGB $(0.5, 0.5, 0.5)$ or, with gamma, $(\sqrt{0.5}, \sqrt{0.5}, \sqrt{0.5})$. I cannot help myself, but the resulting color appears a lot warmer than the metallic gray which would appear if you for example zoomed this page or used a blur filter. I tried to add some yellow to the gradient, and the result looks more similar to the perceived color.

Now, based on the comments, it appears some people perceive yellowish tint and some don't. And I do on my LCD computer screen but not on my mobile display. Thus I guess it's based on some property of the display.

Why don't we perceive the resulting color like real gray? Where does the yellow color come from?

I have a theory: Based on the color arrangement in a typical LCD pixel, one white pixel would contain the red and green color together and blue on the right side. Blue color appears darker to human eye than colors with the same physical intensity, so a white pixel is more green than red than blue. Green and red have roughy the same perceptional insensity, and mixing red and green color addivitely gives yellow, thus the yellow tint? Well, shouldn't then all white pixels on the display appear a bit yellow?

Is this possible? Are there any other explanations?

A side question: Do you know any computer image scaling algorithm or blur filter that tries to mimic this, simulating a blurry vision of a human eye correctly?

Because your monitor is not properly calibrated.

On my screen at home the top and bottom parts have the same hue. At my office though, the top part tends to looks a bit yellow compared to the bottom part that looks more red.

The difference: my screen at home was from a series that was decently calibrated out of the factory, and on top of that I did calibrate it properly with a color calibration tool. That was quite some years ago and its colors have probably degraded since, but it still makes a difference.

A poorly calibrated monitor will not display exactly the color intensity requested for R, G and B, resulting in differences between the color that should be displayed and the one actually displayed. It can even vary depending the area of the screen (many consumer level LCD screens tend to have more light leaking near the edges for example).

The image you included is a good example to highlight a calibration issue, because it allows to compare directly the average color at 50% intensity (combining two halves at 0% and 100% intensity) with the color displayed when requesting 50% intensity. Moreover, the gradient allows to see if the hue is constant from 0% to 100% intensity.

Not the answer you're looking for? Browse other questions tagged color pixel-graphics color-management or ask your own question.

6
How to do a color separation with more than 3 primary colors
7
Function to convert HSV angle to RYB angle
9
Understanding Jump Flooding Algorithm (JFA) for Voronoi Diagrams
0
correct rgb or cmyk code from some proportion of cyan, magenta and yellow
3
Why does _ray_ tracing work?
1
How to determine RGB values given a display spectral response curve?
1
Is spectral response curve and spectral power distribution the same thing?
2
Why do some texture data formats only have the red channel?