In Splitting of NURBS curves there the answer relied on "maximum knot multiplicity". In order not to mix-up different topics I would like to kindly ask to answer it in another question: what is this "knot multiplicity" all about?

When you have as many knots on top of each other as you have degrees in the curve smoothness, you end up with a cusp, also known as as sharp corner. Once you have a sharp corner you can just go and delete the points on the opposite side as they no longer affect points no the other side of the corner. 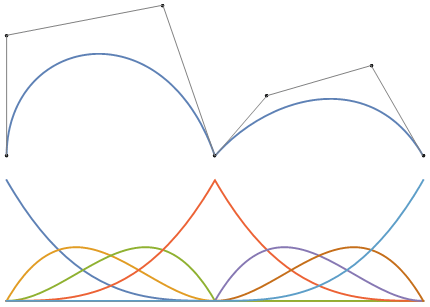 If we look at a knot vector then the multiplicity looks like a seqence of n knots that have the same number. Note if you do not add ecactly as many knots on top as there is smoothness then you get a partially sharp corner.

Alternatively to changing parametrization you can just add points on top of each other. This is equivalent although slight misuse of resources, but useful in surface modeling. Having many control points on top could also be useful for the uniform nature of the knot distribution.

Not the answer you're looking for? Browse other questions tagged nurbs or ask your own question.