How to draw an orthogonal graph from its edges and vertices data?

I am writing a software and I need to represent an graph in a orthogonal manner from topological data (vector of edges,vertices and their connectivity data)

Graphs consist of a set of vertices and a set of edges, each connecting two vertices.A vertex may have any number of connected edges so it makes the problem a lot more complicated.

I have read some articles and its looks like that the Kandinsky model is the post popular one. However I just don't know the algorithm, any other solution (algorithm) that solve the problem is also very welcome.

The following picture shows a real world example for an electricity network which should be considered as raw data, in order to create a graph from this network, some preliminary tasks must be done.

The result I am looking for is something like below, there are some characteristics if you take a look much closer :

The Red Polygon in the middle of the above picture(input data) represents an electricity substation which is a node itself and can be connected to more than 4 edges. There are more red polygons but only one can be fit into the above picture however as you may see, the following picture could cover much more than a red polygon that means it can map a bigger area, so the following picture is much more denser.

In Schematics diagrams, red polygons (Substations) usually maintain their position against each other relatively so if we manage to see beyond the extents of the above map by zooming out for example, we should almost see a triangle that is obviously can be seen at the below while having the left one at the left, the down one at the down ..... (this is not a rule, but I thought it could be a head start for desired algorithm) 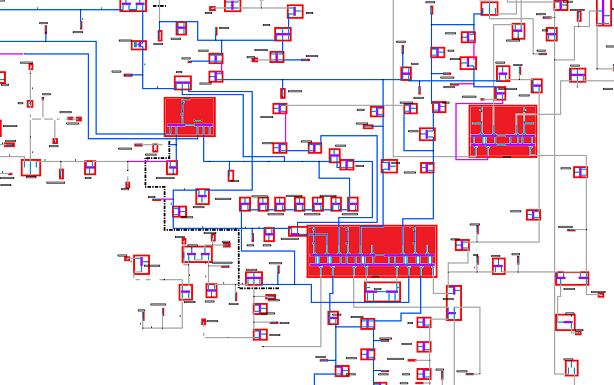 cola.js (a.k.a. WebCola) is a JavaScript based rewrite of libcola which works well with D3.js

Have an orthogonal layout

Orthogonal: Ortholayout with modules for the steps of shape and compaction, ClusterOrthoLayout

Not the answer you're looking for? Browse other questions tagged algorithm vector-graphics or ask your own question.

4
How to get the transform amount from a screen vector and a direction vector?
5
Explanation of the Vatti clipping algorithm
6
List of triangles to minimum amount of convex polygons
5
How to modify Perlin (not simplex) noise to create continental like terrain generation