How is a light probe different than an environmental cube map?

Looking at a light probe texture, it looks like a blurry environment map.

What's the difference between the two, how is a light probe made, and what is the benefit of it being blurry?

There are two different common meanings of "light probe" that I'm aware of. Both of them represent the light around a single point in a scene, i.e. what you would see around you in all directions if you were shrunk down to a tiny size and stood at that point.

One meaning is a spherical harmonic representation of the light around a point. Spherical harmonics are a collection of functions defined over a spherical domain, which are analogous to sine waves that oscillate a certain number of times around the equator and from pole to pole on the sphere.

Spherical harmonics can be used to create a smooth, low-res approximation of any spherical function, by scaling and adding together some number of spherical harmonics—usually 4 (known as linear, first-degree, or one-band SH) or 9 (called quadratic, second-degree, or two-band SH). This is very compact because you only have to store the scaling factors. For instance, for quadratic SH with RGB data, you only need 9*3 = 27 values per probe. So SH makes a very compact, but also necessarily very soft and blurry, representation of the light around a point. This is suitable for diffuse lighting, and perhaps specular with a high roughness.

This screenshot from Simon's Tech Blog shows an array of SH light probes spaced throughout a scene, each one showing the indirect lighting received at that point: 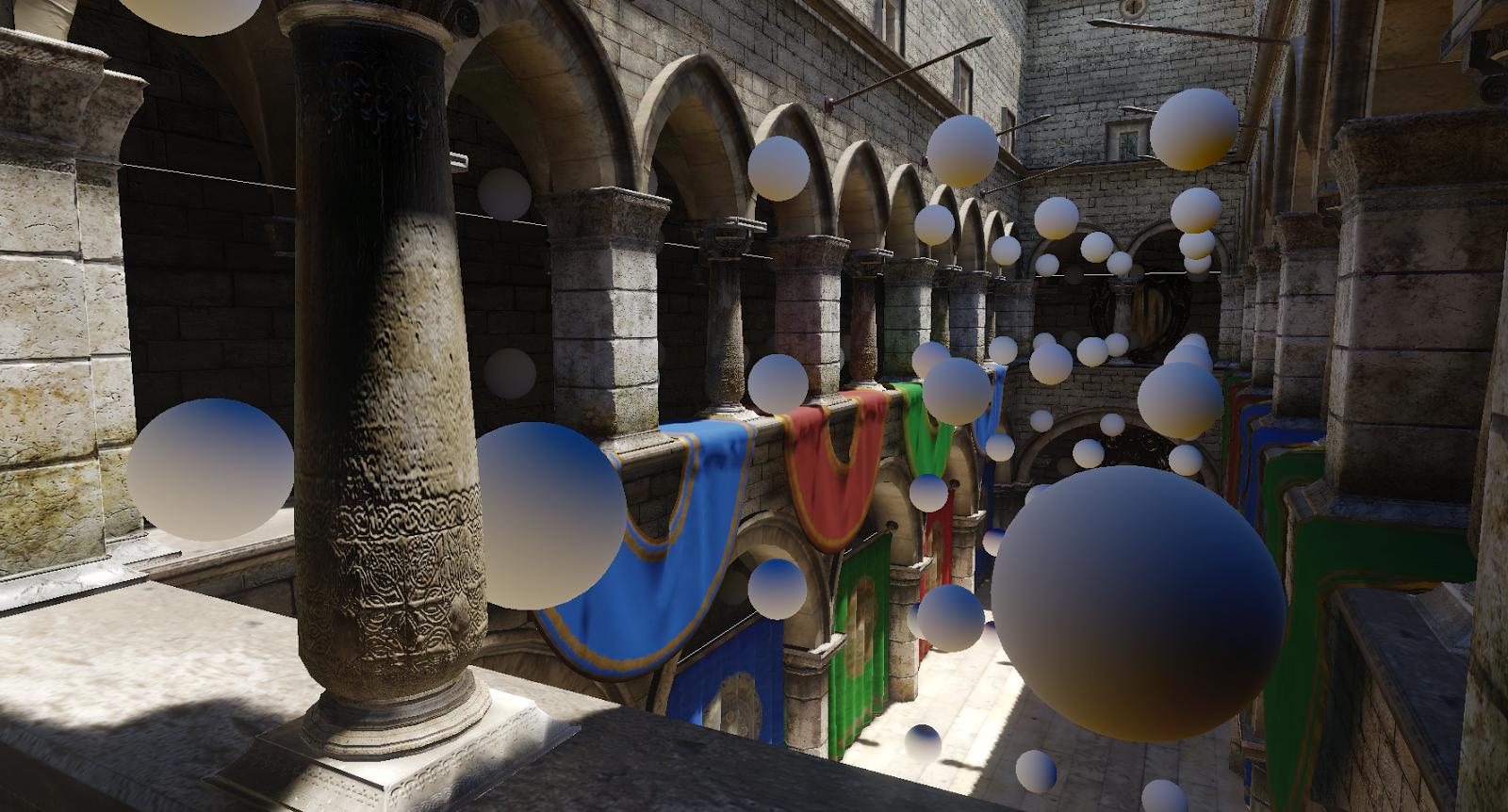 The other currently common meaning of "light probe" is an environment cube-map whose mip levels have been pre-blurred to different extends so it can be used for specular lighting with varying levels of roughness. This image from Seb Lagarde's blog shows the basic idea:

The higher-resolution mips (toward the left) are used for highly polished surfaces where you need a detailed reflected image. Toward the right, the lower-res mip levels are increasingly blurred, and are used for reflections from rougher surfaces. In a shader, when sampling this cubemap, you can calculate your requested mip level based on the material roughness, and take advantage of the trilinear filtering hardware.

Traditionally, the result of the baking process would be lightmaps, but lightmaps only work for diffuse lighting on static geometry, and they take up a lot of memory besides. Baking a bunch of SH light probes (you can afford a lot of them because they're very compact), plus a sparser sprinkling of cubemap light probes, allows you to get decent diffuse and specular indirect lighting on both static and dynamic objects. They're a popular option in games today. 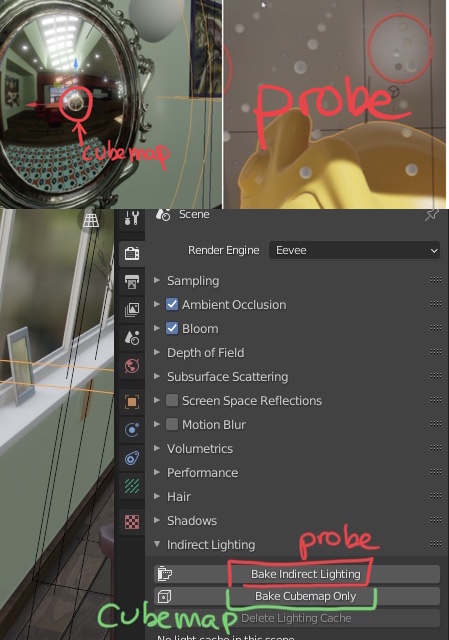 the cubemaps which have this cube shape in blender store a 360 image of that point that can be used for reflections, world texture images...

probes which are the circles store only light info (am i getting white raylights? yellow?)

I might be wrong, in that case correct me

Not the answer you're looking for? Browse other questions tagged lighting or ask your own question.

4
Irradiance Map Equation What is "dω"?
7
Confused about prefiltering environment maps (Manson 16)
1
Radiosity normal map light baking
3
How to access several textures from huge amount of textures in a shader?
3
How to deal with light leaks?
2
OpenGL - Recreate position in viewspace from depth values
0
Trying to understand how to render a volumetric point light