So I have a vector of glm::vec3 containing the triangles for the classic Cornell Box called triangles. The Draw method casts a ray for each pixel on the screen and calls ClosestIntersection which returns true or false and updates a struct containing things like colour and the point of that intersection. Then I simply draw the pixels based on the colours (black for no intersection).

The result is very inconsistent and I can't find the error: 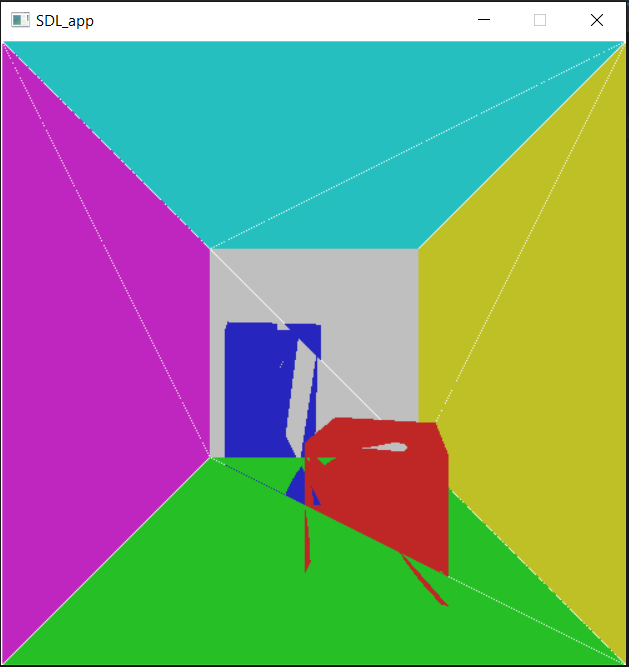 This is the function called from Draw:

There appear to be two problems with the image.

Note that the background colour is white, rather than black, due to the line:

Why this background shows through at the triangle edges I do not know. However, the second problem is identified below, so I recommend you fix that first and then the first problem can be analysed in isolation without the additional distractions.

Cause of the problem with ClosestIntersection

The ClosestIntesection function returns true when an intersection is found, and updates an Intersection object called closestIntersection. However, the intersection stored here is not always the closest to the camera.

The reason for this is here:

This appears in two places so it will need to be fixed in both.

start is cameraPos, presumably in world coordinates. x appears to be in the local coordinates of the triangle being intersected (one of the triangle vertices being the origin). The distance between two points in different coordinate systems is meaningless, so that in different regions of a triangle it will appear to be behind or in front of another triangle for no immediately apparent reason.

If x is first converted to world coordinates then the distance will be correct and the intersection chosen will be the closest to the camera.

Not the answer you're looking for? Browse other questions tagged raytracing c++ glm or ask your own question.

6
Ray tracing - BRDF using Cornell measured spectral data
7
Raytracing Problem - Casting Shadows
4
Path tracer not rendering shadows
4
What's the concept of "Ray" really?
4
Strange behaviour in vertex shader with divisions
3
Inconsistent shading in pathtraced image
2
Problem of understanding the coordinate systems involved in ray tracing
0
Ray tracing the next week: understanding Instances
4
Need a fast ray-box intersection that handles if a ray is parallel and in line with a plane of the box