I am trying to implement for research purposes a path tracer, but so far but results are not so good and I will explain you why. The general idea before getting to the code:

I am working on paths that are generated before sampling them. I mean that the first step of my algorithm consists in calculating a path for a certain pixel (x,y). This path will perform some bounces within the scene and, if terminates on the light, will be considered valid, which means that I can calculate its contribution for the pixel (x,y) which otherwise will be black.

But first, my aim is to reach an "acceptable" image with a few number of SPP (around 16-32 spp). This is because I am following the code of a target framework, easy implemented, that manages to reach such good results in few steps (explained later). The following is the target image that I want to reach, produced by the target framework: 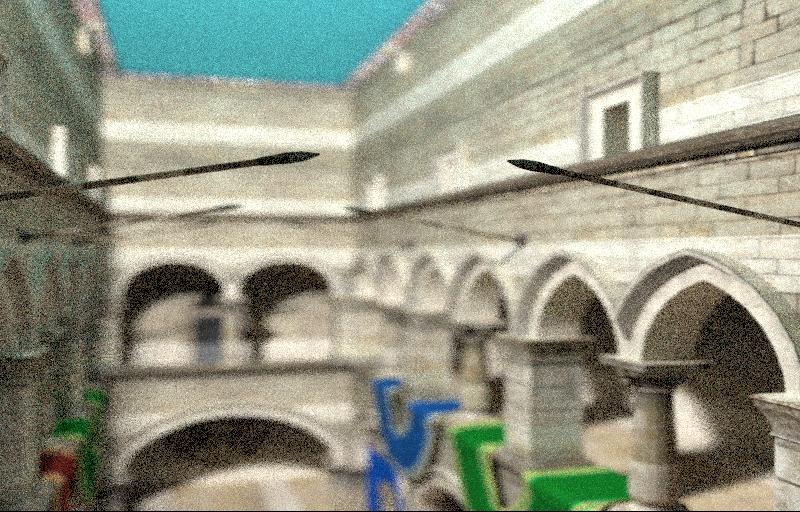 It's rendered with 16SPP. The core code behind it is quite straightforward. It just implements the rendering equation and it is shown and commented below:

The DiffuseReflectionCosineWeighted implies that we have to apply a PDF to our recursive step. This PDF is cosTheta/PI and we have to divide for it in:

You can't see it in the code because it gets simplified witht the cosTheta attenuation term of the rendering equation and PI of the diffuse BRDF where my BRDF is indeed diffuse/PI because we want to consider only DIFFUSE objects. (For any question about the code do not hesitate to ask.)

I tried to emulate this code with the difference that I don't calculate the path at the moment I want to calculate the color of a pixel (like the target framework does above), but I calculate a path beforehand: My generatePath() method indeed tracks the path into the scene and checks all the vertices it hits. The checkIfRayIntersectSomething(t) method you will see used, it's just a pseudo method implemented in my framework and that I omit posting cause of its length. I use it to check if my ray hits something in the scene, if it does, it update the "t" with the distance to that object. NOTE: the light is not considered an object itself. Hence, I also have a checkRayLightIntersection(hitLightPoint) which checks the intersection with the light, if there is any, the hitLightPoint is updated with the point on the light I have been hitting. The light is a 2D surface of area 2x2 placed at the same position (-1,20,9), as the target framework does.

First the definition of a couple of struct to store some info:

And now the main code:

The BSDFDiffuseReflectionCosineWeighted() just calculates the new direction like in the target framework, tested and working. What remains last is the Sample method which calculates the final color of the pixel using the path calculated right above:

The problem is that the image is really dark, you can see how small the light is, but somehow in the target framework it works correctly while in mine: 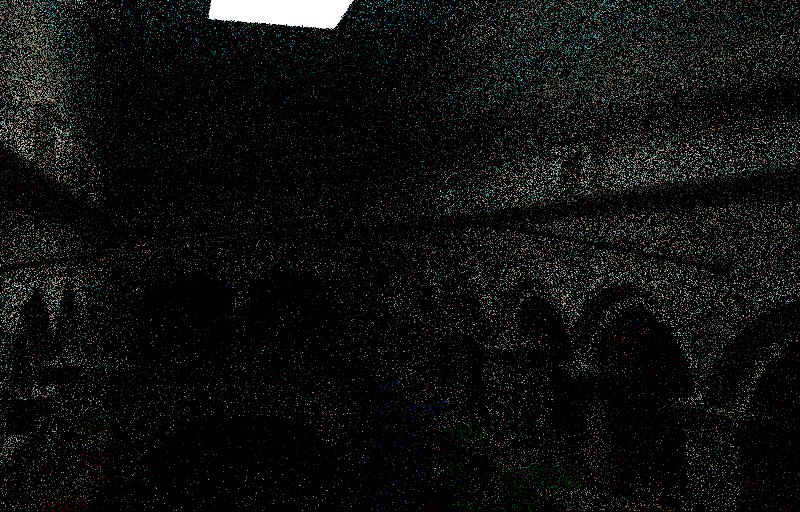 This is because not many rays reach the light, so many paths are not considered valid. If instead I make my light broad (20x20) results are better but I lose the shadows: 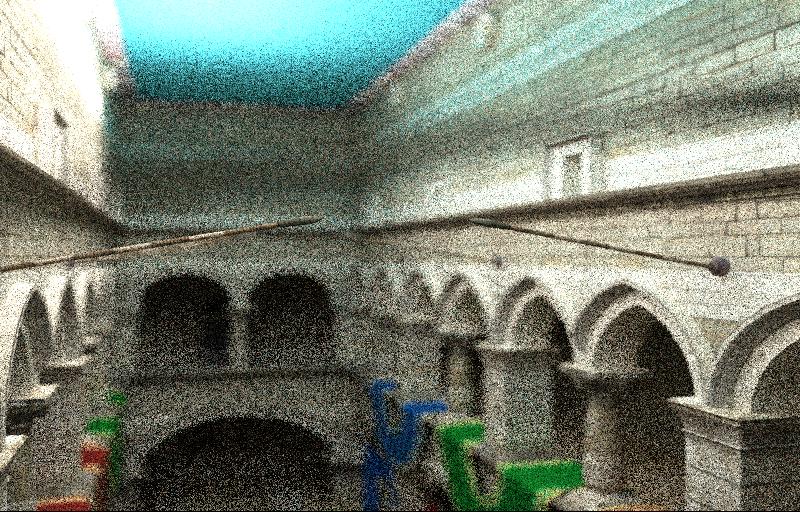 I am sure that less rays reach the light cause I have been calculating them in both cases: small area light and big area light. I also tried to compensate the dark image by increasing the light contribution when reached by the path, but it brings to white pixels (for paths that reach the light) and the black ones (cause of invalid path) keep remaining black, so not a good approach. It seems that (as far as my understanding arrives) the target framework applies direct lighting, that's why such a good image BUT according to theory direct lighting only decrease variance, reducing the noise.. which means that using or not direct lighting shouldn't change the resulting image so much. Is there a way according to you to fix this problem? Thanks in advance.

From the look of your screen capture, I suspect there might still be a bug in your code. Noise is to be expected with only 16 spp, but your picture still looks surprisingly dark to me. For comparison, here is what my implementation of SmallPT looks like with 16 spp, 15 bounces, and no next event prediction: 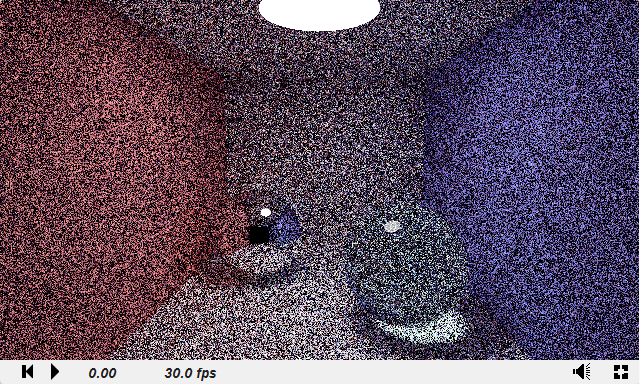 (here it is on ShaderToy)

Noisy, but not nearly as dark as your picture. It is very different scene, but considering the that the shape is similar (a box with one side open and only one light source), I would expect to get a similar luminosity/noise appearance.

The rest of this answer assumes your code to be correct.

The balance between light source size, noise and SPP is a classic problem, to which there is no magical solution. From easiest to hardest, you could:

The problem of reducing noise is still under active research though, and there is no silver bullet. At this point you will need to read what are the latest developments.

Not the answer you're looking for? Browse other questions tagged c++ lighting shadow pathtracing global-illumination or ask your own question.