Could we dispense the near clipping plane?

Would it be, at least theoretically, possible to render without a near clipping plane? Could raytracing ignore this perchance?

Quite many budding 3d artists have a WTF moment the first time they encounter the clipping plane. If this could be avoided then it would be a big win for usability of 3D authoring apps. Its not one of those things a normal artist would think about until explained.

The near clipping plane is a fundamental feature of projective rasterization. To borrow a diagram from Eric Lengyel's Projection Matrix Tricks presentation: 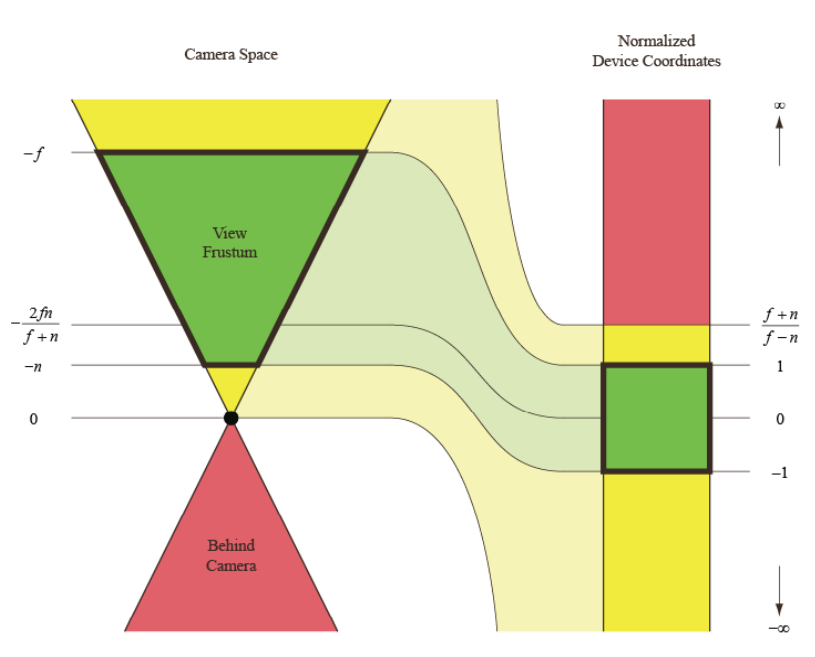 More critically for the current rasterization pipeline, the perspective divide does fun things with numerical precision. See the line at NDC 0 in the diagram above? It's halfway through the viewing volume in clip space, but not at all near halfway through the view frustum in camera space. In fact, its position depends on the near clip plane's distance to the eye! This means that over half of the depth range in clip space is in that region near the eye. As you get the near clip plane closer and closer to the eye, that plane pulls in even closer and you waste more and more depth range. This isn't necessarily fundamental—you don't have to store z/w in the depth buffer—but it is convenient. Here's an article from Nathan Reed about depth precision, and a few notes about why the projected z/w depth is useful from Emil Persson.

Finally, I'll plug a post in the excellent "A trip through the Graphics Pipeline" series, which is very interesting and references homogeneous rasterization algorithms which, in theory, could avoid the need to do clipping in projected clip space, which would totally avoid some of these traps.

The near clipping plane in rasterizing setups with perspective projection is there to avoid a divide by 0 and bound the possible depths for orthogonal projection.

With a bit of extra math you can make the depth stored in the depth buffer linear again. However you still need the guard against the divide by 0.

In raytracing the near plane can be at 0 no problem. There is nothing technical stopping you from putting it at -10 however (besides that it would be very odd).

Not the answer you're looking for? Browse other questions tagged raytracing clipping or ask your own question.

6
Speeding up convergence: am I reinventing the wheel?
1
Outcodes in Cohen-Sutherland Clipping Algorithm
3
Cohen-Sutherland Clipping
4
Solid angle and surface area values in (photometric) raytracing
2
Alternatives to Clipping in avoiding display problem
3
Why should you do homogenization after clipping?
3
Should direct illumination and path tracers render the same scene equally bright?
3
3D coordinates of intersection point in clipping for a rasterizer