How is VR different from a monitor

Apparently Macintosh computers cannot handle the Oculus Rift, because of their 'inferior' graphics cards. But should VR not just be like an external monitor? And concerning computer graphics, how are VR games any different from other games the Macintosh can run easily? Where is the problem?

VR requires a much higher resolution and framerate, and a much lower latency (start of draw to showing on screen).

If any of those things are missing then people tend to get nauseated.

All of those require much higher bandwidth and compute power than Apple's cards are supposed to be able to handle.

Macs are not gaming machines. They never have been. There was a time maybe 10-15 years ago when you could build a mid-tier gaming Mac, at significantly higher expense than a PC, but Macs have never catered to anything more than very casual gamers. They don't run other games "easily" - they just adequately run some games, barely run others, and simply can't run a lot of popular titles (if they exist at all).

Every Mac, with two exceptions, uses integrated graphics on their Intel chips.

The MacBookPro can optionally can be fitted with a Radeon R9 370X, and the MacPro has the FirePro option above. Let's look at 3D performance of these various options (The FirePro D700 is a Mac special - it's roughly in line with the specs of the W9000 PC variant): 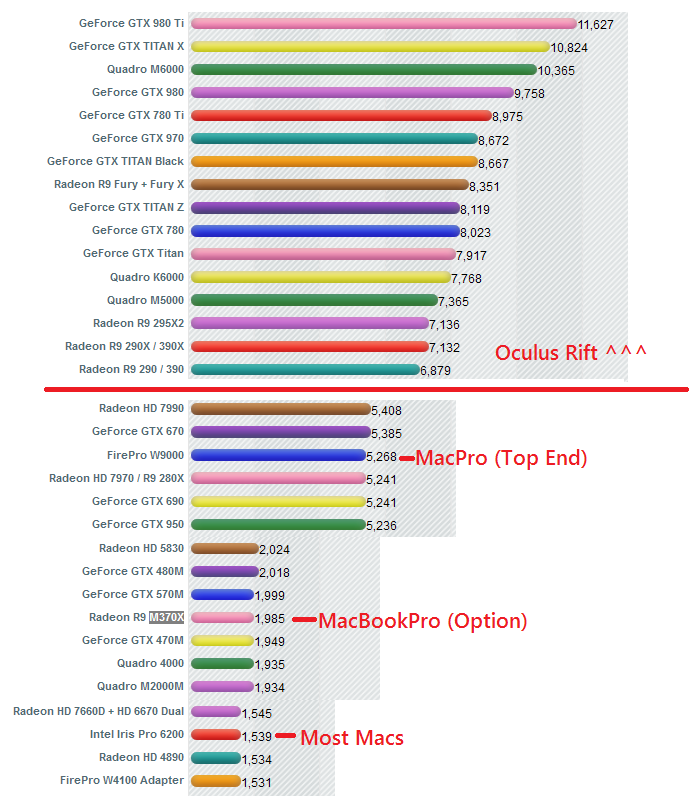 The multi-thousand dollar FirePro is sitting there next to an old GTX 670 that you can pick up in used bargain bins these days. So what gives?

The FirePro is a professional GPU - it competes with NVidia's Quadro and Tesla line of cards. It is designed specifically for precision workstation GPU tasks, particularly for double-precision calculations. These are important for CAD/Architechtural and Engineering applications as well as for scientific computing. The cards can be used just fine to play 3D games, but they are not optimized for that task and naturally underperform when compared to high end gaming GPUs like the GTX970/980, etc.

Gaming GPUs dedicate resources to lower precision calculations (which they can do more of, and more quickly) and eye-candy goodies. The tasks which they set themselves to are largely at odds with each other in terms of the style of hardware that is needed to get the job done.

If you wanted to build a gaming mac right now, you really can't. None of the systems available even have slots anymore to add in aftermarket GPUs (and they were twice the price of PC GPUs back in the days when you could, and came out months and months later than their PC counterparts so were always behind the cutting edge). The only expandable Mac right now is the MacPro, and it is so ludicrously expensive that you would be crazy to try to make a gaming machine out of it (in fact, the hardware simply can't be had). With expensive Xeon processors and FirePro graphics, the system is a highly specialized workstation that is firmly aimed at creative, scientific, and engineering professionals.

So where does that leave the Mac? Absolutely, completely out of the gaming arena - full stop. It's got enough juice to run a few very casual games at very modest quality for home users, but that's just about it. The Oculus Rift needs major GPU horsepower. For 3D it needs to compute every scene from two unique perspectives (one for each eye), instantly doubling the amount of pre-rendering calculation it needs to do. It then needs to render each of these independent scenes to two independent displays and keep everything moving fast and smooth enough to not make you want to vomit or have some sort of seizure. That means it needs a powerful gaming GPU, and these just aren't available for the Mac anywhere.

A VR headset is a monitor in terms of connections that just requires special software, but the issue is more of software and the capabilities of Mac hardware.

You are most likely referring to the founder of Oculus, Palmer Luckeey, and his comment on Macs. He said:

You can buy a $6,000 Mac Pro with the top of the line AMD FirePro D700, and it still doesn't match our recommended specs. So if they prioritize higher-end GPUs like they used to for a while back in the day, we'd love to support Mac. But right now, there's just not a single machine out there that supports it.

What he means is that not a single Mac has the high end gaming hardware necessary to provide the performance needed for a quality VR experience like the Rift.

VR requires a very tight coupling of high performance hardware to provide low latency imagery. Macs have actually been behind other computers in terms of computer graphics performance and quality. A VR game requires a higher framerate than the average game, with minimums being much higher than the 30 or 60 frames per second that most normal games aim for. VR games need lower latency than the 60 Hz latency of 16.67 ms to be immersive and help prevent motion sickness. These requirements are not flexible. 60 Hz is doable, but it's often seen as the minimum, with many reporting sickness and physical symptoms from framerates of 60 Hz or lower that are reduced or minimized with higher framerates.

Another factor is simply of market size. The percentage of the Mac market that has hardware capable of handling higher end games at all is an even smaller segment of an already smaller market. Apple's most popular products do not contain high end graphics chips, and instead use lower end integrated or mobile chips.

A external monitor in most cases is only one viewport. Means you have a monoscopic image displayed.

Having a HMD (Head-Mounted Display) like Oculus Rift requires you to render your virtual scene for both eyes in order to have stereoscopic 3D. This is essential for the immersion and having immersion is the only reason to use a HMD.

But rendering two viewports (one for each eye) does take additional computational power. Taking into account what ratchet freak already said it is even harder to maintain the high framerate and resolution at a low latency.

To overcome this you need serious computational power and well some people think the hardware used by Apple does not provide enough of it.

Not the answer you're looking for? Browse other questions tagged virtual-reality or ask your own question.

7
What methods/technologies to reduce required performance for virtual reality are there?
6
Instanced Stereo Rendering vs. Multiple Command Buffers
6
How can I intercept and filter all frames coming out of SteamVR?