As explained in Holger Dammetz page Hammersley Points on the Hemisphere, the 2D coordinates (u,v) are usually mapped to the spherical coordinates (θ, φ). 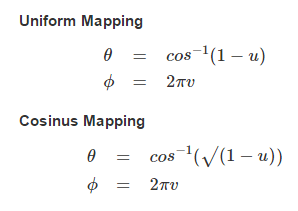 As a result, the coordinate "uniformly distributed" - u in the 2D case - is the polar angle θ. This looks counter-intuitive to me, I would have mapped regularly spaced u values to regularly spaced azimuth φ values. To avoid "empty areas" like in this example: 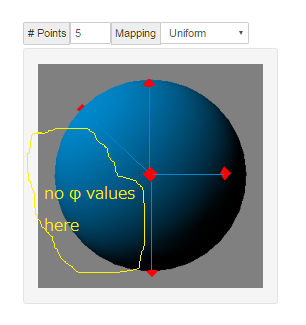 which is generated by the mapping of the following 2D set: 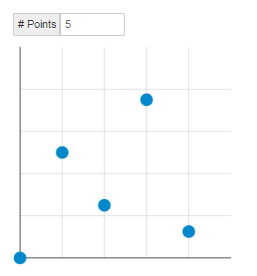 You can of course, as you suggested, map (u, v) to (φ, θ). Unfortunately, it does not solve the problem for 5 points: 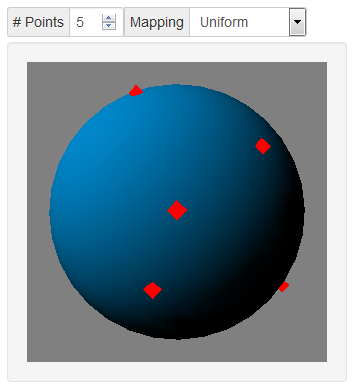 I've changed Holger Dammertz' code a bit (switched u and v), and you see that the problem still persists. For a higher number of points, it really doesn't seem to make a (visual) difference.

The Hammersley point set is a way to very quickly determine points on a sphere that have good, but don't need to have a perfect distribution. In the problematic case of very few points, Hammersley might just not be the tool for the job. Pre-calculating and storing points sounds like a better option to me.

The "Uniform Mapping" here is incorrect. It does not transform to a uniform distribution on the sphere.

Very very bad me. I misread the equation AND I didn't even consult my own reference [1], if I had I would have seen my mistake.

Still the method from [2] is interesting and is described below.

To map a uniform point set from the unit square to the sphere or half sphere requires an area-preserving map. That will maintain the uniform property. For pseudo-random that's sufficient (points are independent), however low-discrepancy point set will have its discrepancy measure effected by distortions in area introduced by the map. I'm not aware of any references with respect to this point.

The method from [2] starts by mapping unit square to the unit disk. One way we can do this is by using a rejection method. Pseudo-code looks like this:

Also non-rejection based methods exist, for example [3] which requires one square root and one trig operation. Note that the rejection method does not distort areas so the discrepancy measure remains the same.

then the transform to the sphere is:

or if you wanted a half-sphere, say positive Z, (just to state the obvious):

There is a Stackexchange: Mathematics thread that discusses this method ([4],[5]).

Also if you want to procedurally generate a LDS the additive recurrence formulation of the Weyl sequence is very cheap.

Not the answer you're looking for? Browse other questions tagged 2d sampling mapping distribution hemisphere or ask your own question.

17
World coordinates, Normalised device coordinates and device coordinates
4
How to get polygon coordinates in screen space
4
Why does the integral of NDF over a solid angle equals the area where micronormals belong to that angle?
3
Remove clearly not visible vertices from a polygon
0
Skia example code not writing an image
0
I need to build my own map renderer
2
Why is pixel 0,0 at the top left of some formats and bottom left of others?
2
How is this normals map supposed to work?
1
projecting 3d onto 2d plane is not showing up correctly