What is Tessellation in computer graphics

In recent games I have noticed something called Tessellation, Turning the thing ON destroys my frame rate.

I have noticed that it when turned on it looks like Anti - Aliasing.

Can someone give me further information on what exactly the GPU does.

Tesselation is a technique that allows you to generate primitives (triangles, lines, points and such) on the graphics-card. Specifically, it lets you repeatedly subdivide the current geometry into a finer mesh.

This allows you to load a relatively coarse mesh on your graphics card, generate more vertices and triangles dynamically and then have a mesh on the screen that looks much smoother.

Most of the time this tesselation is done anew in each single frame and this could be the reason that your frame-rate drops once you enable this.

Tesselation is done in multiple stages, and it is done AFTER the vertex shader. 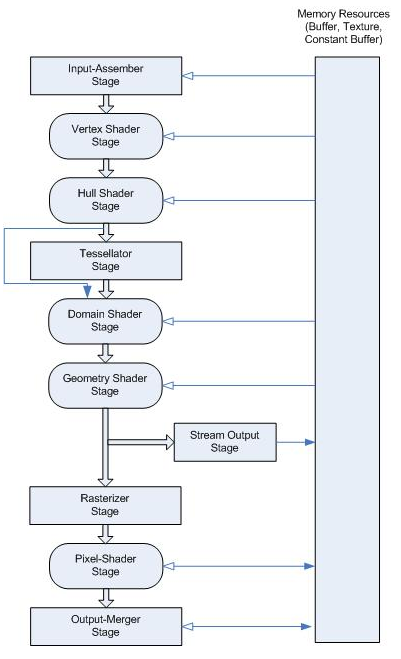 The first and the last stage is programmable, the actual tesselation is done by the hardware in a fixed function stage.

In the Tesselation Control shader you set the type and number of subdivisions.

Then the hardware tessellator divides the geometry according to the Control Shader.

Lastly, the Tessellation Evaluation Shader is called for each newly generated vertex. In this shader, you set the type of primitive you want to generate and how the vertices are spaced and many other things. This shader can also be used to do all sorts of per-vertex calculations just like a vertex shader. It is guaranteed to be called at least once for each generated vertex.

If you want to do any further work on the primitives, you can add a Geometry shader.

It activate 3 stages in the pipeline.

The first is the tessellation control shader (hull shader in D3D) which looks at a set of vertices and then outputs how it should be divided up in separate triangles.

The second is a fixed function stage that will generate the requested triangles.

The third stage the tessellation evalutation shader (domain shader in D3D) which is run per generated vertex and will put it in the correct place based on the barycentric coordinates of the generated vertex.

This is used for level of detail to generate more triangles when the mesh is closer to the camera.

Not the answer you're looking for? Browse other questions tagged pixel-graphics or ask your own question.

8
How does a computer upscale 1024x768 resolution to 1920x1080?
8
Why does checkerboard pattern on a computer screen appear with a yellowish tint?
5
Do GPU performance improve when rendering at native or half resolution, compared to fixed scaling?
3
What is this technique called and how can I reproduce it algorithmically?