What I'm asking for

I stress that I am not asking for the formula---I know the formula, and how to derive it. Several different versions of it are reproduced near the end of the post. In fact, someone else has not only derived it as well, but also nicely presented one of the derivations here.

What I need is a reputable source for the formula so that, for example, one could put it on Wikipedia without violating its ban on reporting original research. [People have actually tried... But the relevant article has some very conscientious editor who deleted the section on the grounds of it being original research... and, well, unfortunately, the editor is correct, so there's not much point in trying to fight it.]

Since someone here might have modeled the way the Earth looks form orbit, perhaps he or she might know if this formula (or, more likely, some generalization of it) is published in some book, or journal, or conference proceedings, or class notes, etc.

I've done the "due googling"

Please understand that I'm not asking anyone to go searching for the answer on my behalf. I've done lots of googling already, and am only posting here as a last resort. My (far-fetched) hope is that someone here will simply know a reference right off the bat; if not... well, I hope at least you enjoyed the pretty picture below (if I do say so myself, with full awareness I'm talking to people interested in computer graphics of all things) before you moved on to bigger and better things.

Suppose the quadric is a sphere, then the cone of rays between the camera centre and quadric is right-circular, i.e. the contour generator is a circle, with the plane of the circle orthogonal to the line joining the camera and sphere centres. This can be seen from the rotational symmetry of the geometry about this line. The image of the sphere is obtained by intersecting the cone with the image plane. It is clear that this is a classical conic section, so that the apparent contour of a sphere is a conic.

In principle, this would be exactly what is needed, if only just a bit more information were included---at least an expression for the eccentricity of the conic as a function of the distance to the sphere and the sphere radius (in the case when the image plane is perpendicular to a generatrix of the cone, as is the case when the pinhole camera is directed at a point on the horizon).

Details about the formula for which I need a scholarly reference

We assume a perfectly spherical, perfectly smooth Earth with no atmosphere. We point an idealized pinhole camera at the horizon, and, using straightforward central projection, compute the shape of the image of the horizon on the back of the camera (i.e. the shape it will have on film---the "film plane"). Here's a graphic (made in Asymptote, for those interested) that should make this clearer: 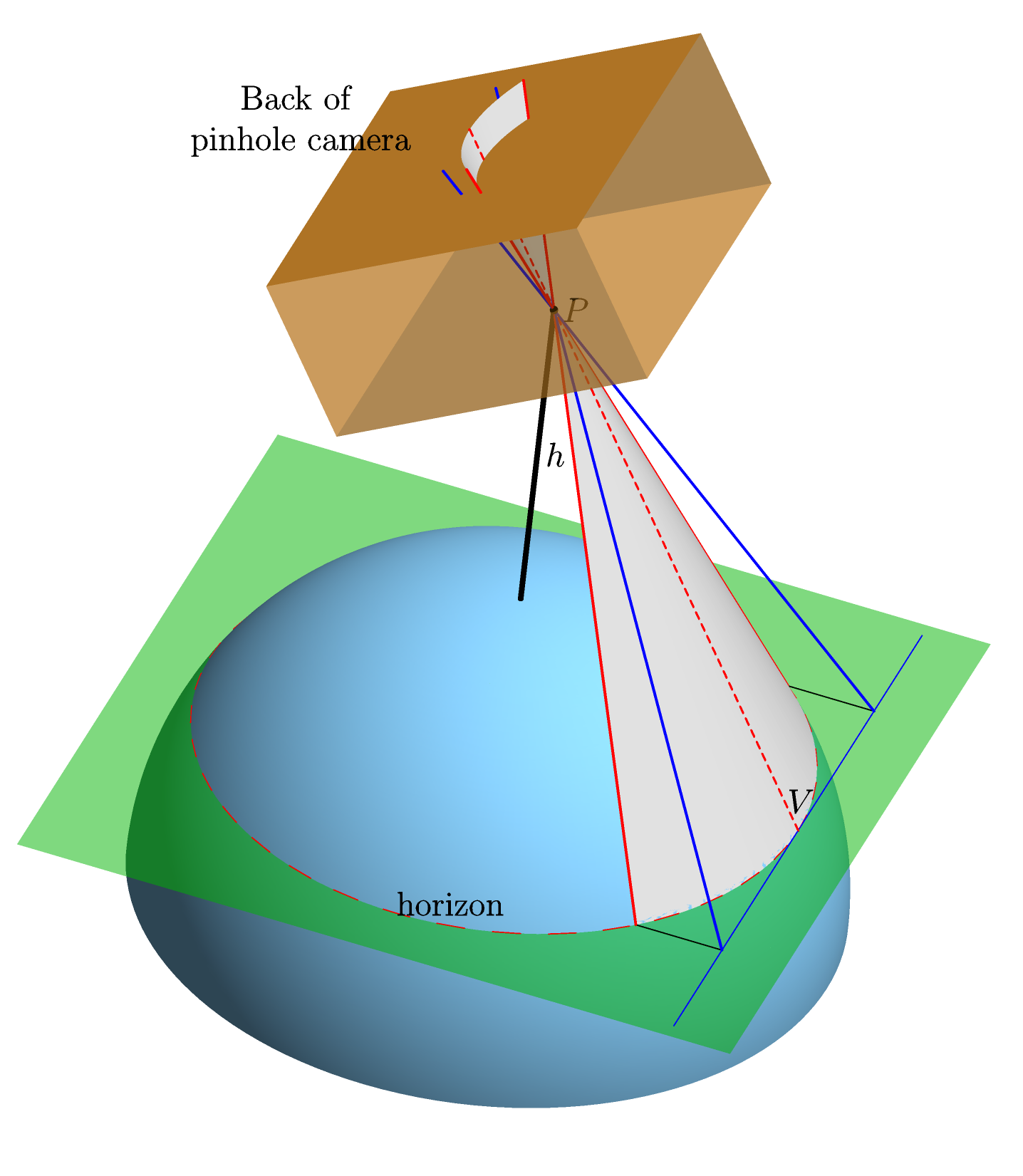 As we saw above, the image of the horizon is a portion of a conic section. Let $\varepsilon$ be the eccentricity of the conic; the derivation I mentioned above instead uses a parameter $k$, which is just the inverse eccentricity: $k=1/\varepsilon$. The eccentricity itself is given as $\varepsilon=1/\sqrt{\epsilon(2+\epsilon)}$, where $\epsilon=h/R$ is the ratio of the altitude $h$ of the pinhole above the surface of the Earth and the Earth radius $R$. [Instead of using $\epsilon$, which is the ratio of the altitude to $R$, it may be useful to use $\eta$, the ratio of the pinhole's distance to the Earth's center, $h+R$, to the Earth's radius: $\eta=(R+h)/R=1+\epsilon$. In terms of $\eta$, we have $\varepsilon=1/\sqrt{\eta^{2}-1}$.]

The distance from the pinhole (point $P$ in the graphic) to the film plane is taken to be one unit length.

With these definitions out of the way, we are ready to write down a representation of the conic section that is the image of the Earth's horizon. This can be written in many ways, some of which are given below. What I need is a reputable reference for any one of these formulas, or for a formula equivalent to them.

1. The explicit formula given in the derivation mentioned above

The derivation I mentioned above gives this as the final version:

Let's represent this in a couple of additional ways.

2. Expression in terms of the canonical equation of a conic section

In this case, the equation takes the following form:

Details: the above formula holds in the case of a right circular cone, whose sides subtend an angle of $2\theta$, being intersected---at a distance $d$ from the vertex of the cone---by a plane at an angle $\omega$ relative to the cone axis. (To clarify: $d$ is the distance from the cone vertex to the point on the ellipse that is the closest to the cone vertex; that point is always one of the ends of the major axis of the ellipse). In this general case, the eccentricity is given as $\varepsilon=\cos \omega/\cos \theta$, while $\mu=d(\varepsilon-\cos|\omega+\theta|)$.

In terms of the above graphic: $d$ is the distance from $P$ to the film plane (i.e., the distance along the dotted red line); $\theta$ is the angle between the dotted red line and the axis of the cone (which is the line joining $P$ and the center of the Earth---the extension of the black line labeled $h$ in the graphic); the angle $\omega$ is the angle between the axis of the cone and the film plane.

Given that the film plane is perpendicular to the dotted red line, we have $\omega+\theta=\pi/2$; in addition, we take $d=1$, which then together give that $\mu=\varepsilon$.

3. Expression in terms of the ``standard form' of a conic section

This form is perhaps the most familiar:

It is related to the parameters entering the canonical equation (see 2., above) as follows:

It is obvious that the parabolic case, $\varepsilon=1$, will create problems; as mentioned above, that case must be dealt with through taking the limit $\varepsilon\to 1$.

where $\alpha$ is the longitude of a point on the horizon, defined so that $\alpha=\pi/2$ corresponds to the point $V$ in the image above (i.e. to the point at which the pinhole camera is trained).

For how one might use these formulas, see this.

Has anyone seen the formulas above in some reputable source, possibly in the context of modeling how the Earth looks from space? If so, could you let me know what this source was?

I'd expect that you can find the relevant formulae (and derivations) in any standard text on 3D coordinate geometry. Some likely places are:

These are all pretty old books, and you may have trouble finding them.

Calling the derivation "original research" seems absurd, to me. It's a high-school homework problem in analytic geometry.

Not the answer you're looking for? Browse other questions tagged projections simulation or ask your own question.