How to reliably find out whether two planar Bezier curves intersect? By "reliably" I mean the test will answer "yes" only when the curves intersect, and "no" only when they don't intersect. I don't need to know what parameters the intersection was found at. I also would like to use floating-point numbers in the implementation.

I found several answers on StackOverflow which use the curves' bounding-boxes for the test: this is not what I'm after as such test may report intersection even if the curves don't intersect.

For cubic curves, the function $f$ is then a sixth-degree polynomial in two variables. You can then apply numerical optimization techniques such as the simplex method or conjugate gradient descent. Unfortunately the function can have several local minima (it's not convex), so optimization isn't easy. There may well be more specialized optimization methods available for polynomials, but this isn't an area of expertise for me.

[Disclaimer: I think the following should work but have not actually coded it myself]

I couldn't think of a "trivial" method of producing a yes/no answer but the following would be a reasonable approach to a practical solution to the question.

It seems to me that, given a pair of 2D Beziers for which we wish to determine do or don't intersect, there are six cases to consider:

For the moment we'll ignore 3 and 4, but come back to them later.

As you hint in your question, if the respective bounding boxes of the control points of A and B), don't intersect, then the curves can't intersect. Obviously this is a quick reject test but it's overly conservative. As you probably know, with a Bezier curve, the convex hull of its control points forms a (tighter) bound on the curve. We can thus use the separating axis technique to decide if the hulls of A and B don't intersect. (e.g. as shown in Wikipedia:) 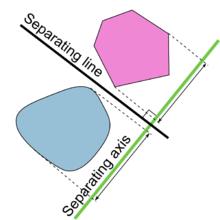 If the case 1 test fails, you could then check for the "trivial" existence of an intersection. Now there are probably better ways to do this, but the following, relatively cheap, approach occurred to me: 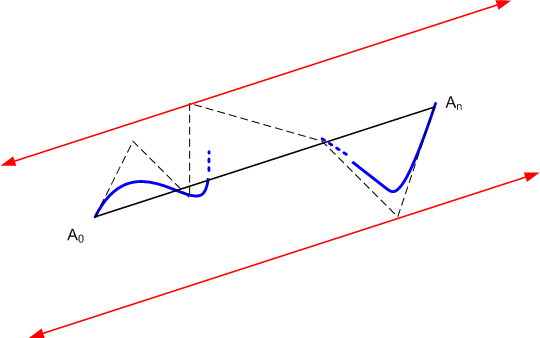 We know the curve starts at $A_0$, terminates at $A_n$, and will lie inside the convex hull. For simplicity let us compute the direction of the line segment $\overline{A_0A_n} $ and the compute the bounds on either side (i.e. take dot products of the remaining control points against the perpendicular to $\overline{A_0A_n}$).

If we do the same with curve B we get the following (possible) case: 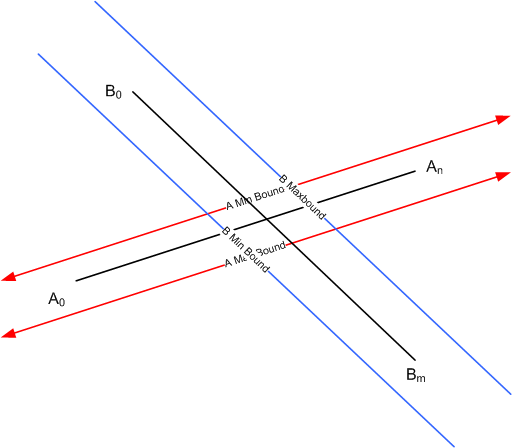 If we find $A_0$ and $A_n$ are outside opposite bounds of B and that $B_0$ and $B_m$ are on the outsides of the bounds of A, then, by the continuity of Beziers, there must be at least one intersection.

If we can't immediately show either of the above cases, then split each of the Beziers into two "halves", i.e. $A^1, A^2, B^1, B^2$. This is relatively straightforward (left as an exercise to the reader) but is particularly trivial for quadratic Beziers:

This is where it becomes slightly more tedious.

If "case 3" gets past the "case 1" test, it seems to me that you need to solve for an actual intersection. Given that there is a simple process to map the N control points of a Bezier, A(s), to the N-1 points of the Bezier, A'(s), representing its 1st derivative then (provided care is taken for the relatively rare, so-called "degenerate" situations where the 1st derivative does to zero), then Newton iteration (on one dimension) could be used to find potential solutions.
Note also that, since the control points of A'(s) are a bound on the derivative values, there is the potential to do early elimination of some cases.

Case 5 seems relatively unlikely, so perhaps only if after a few recursions there is no conclusive proof, one could try each end point of A against curve B and vice versa. This would only give a proof of intersection - not a proof of non-intersection.

Not the answer you're looking for? Browse other questions tagged computational-geometry bezier-curve cad or ask your own question.

8
How should I fill a shape consisting of Bezier curves and straight lines?