How to create a patterned object with variable pattern density in real-time?

Assume there is some value p, calculated per-frame, that varies continuously over the surface of an object. The value of p determines the density of some pattern on the surface. For example, in a case with only two possible densities if p < 0.3 it is high density, otherwise it is low.

I've thought of a simple high-level solution: create two textures, each of different densities, and based on the value of p sample from the appropriate one. However, there's a problem with the boundary between high- and low-densities.

Here is an example to illustrate the problem (note my problem is NOT exclusive to this example pattern of dots. I describe the patterns I'm working with later on):

And here is the threshold between low- and high- (displayed on the high density texture but that's not relevant.) If under the line, it implies the high-density texture should be sampled. 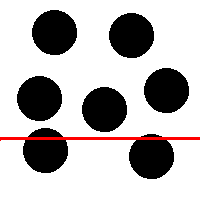 And finally here is the comparison between what is desired and what would actually happen using this method: 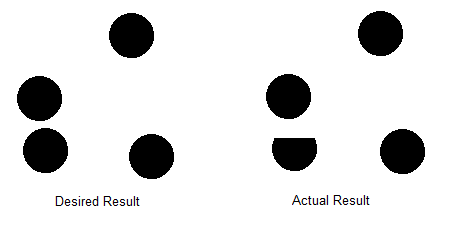 I'm interested if anyone has a way to improve my solution or even has another method entirely. The constraint here is that p is calculated per-frame in real-time. Another constraint is related to the pattern texture: the pattern is black and white, where black is the pattern and white is the background (like the circles in the example). The pattern may not just be identical shapes repeated, but any arrangement of arbitrary black shapes over a white background. (Maybe pattern is the wrong choice of word.)

I'm not familiar with the research in this field so I wasn't sure which keywords to search, so I'd even appreciate if anyone could point me in the right direction.

In order to ensure that the pattern shapes are always either wholly present or absent, never cut off, it's necessary to ensure that the same p value is used for all texels within the shape. In your example of circles, all the texels in a given circle need to agree on p.

I assume that you have some way of evaluating p at a given point on the surface (whether it is looked up from a texture or calculated from some function). Then one way to ensure a group of texels all get the same p value is to ensure they all look it up from the same point.

The UVs of this evaluation point could be stored in extra channels of the pattern texture. For instance, you could have the red and green channels store the UV coordinates at which to evaluate p, the blue channel store the threshold at which to turn on that pattern element, and the alpha store the antialiased gray level of the pattern to display. The UV+threshold data could also be in a separate, secondary texture if desired.

To generate this UV+threshold texture, starting from an input pattern texture, you could programmatically find connected components (e.g. by searching for black pixels and flood-filling). Set the evaluation point for all texels in each component to the UV of the component's center, and generate a random threshold for it. Then, when rendering, use a pixel shader that first samples this texture, then looks up p at the given evaluation point and compares it to the given threshold.

That way, each pattern shape will see a uniform p value and threshold, and will either turn on or turn off fully. As p increases, more of the shapes will pass their threshold and appear, giving the impression of a continuously varying density.