I'm trying to figure out how to properly implement flat shading for meshes containing non-planar polygons (using OpenGL/GLSL). The aim is to obtain something similar to the result Blender gives (all polygons below are non-planar): 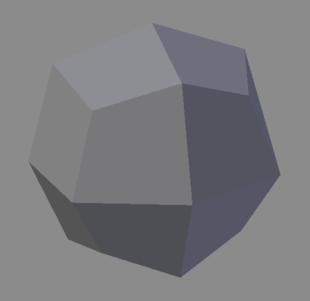 To provide a bit of context — the non-planar polygons (e.g. quads, pentagons, ...) are either present in the mesh I load or appear as a result of applying a subdivision scheme (such as Catmull-Clark) to the mesh.

In case of a triangle mesh, I'm aware of the following approaches to implement flat shading —

For a mesh containing non-planar polygons the first three options don't yield the result I'm after. In my implementation (using the Qt framework) I use GL_TRIANGLE_FAN: 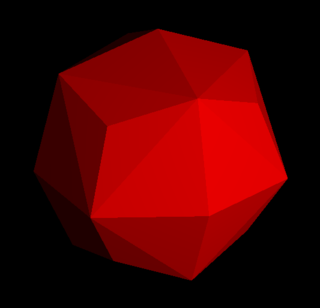 The fourth option could work, but isn't very elegant — I'd like to use either glDrawElements or glDrawMultiElements. One other option would be to use glDrawElements while looping over the faces one by one (instead of invoking it once using glPrimitiveRestartIndex). In that case, one could upload a uniform normal for each face. However, this does not seem very efficient. Any other ideas?

Without knowing the internals of Blender, I would say it uses shared normals for the quads, splitting the normals only on edges between the quads, not between the triangles. So your idea of uploading a normal per quad is probably close to the result you are looking for.

If you load the mesh as quads, you are set. If you are using an old version of OpenGL where quads still exist, you may even be able to use solution 3).

If you load the mesh as triangles, you will have to figure out which triangles originated in quads. You can likely do this simply by enforcing split normals beyond a fixed angle between adjacent triangles.

I am not sure there is a simple dynamic solution, where you just render any mesh. You may be able to use the geometry shader to look at the adjacent vertices, but the easiest version is to smooth the normals once before upload.

12
OpenGL - Detection of edges
4
What is better to use for real-time computing Mesh - Plane intersection points, GPU or CPU?
1
Same specular lighting on both tris in a quad (for "low-poly" "flat shading" look)?
1
How to compute normal in quartic Walton-Meek's Gregory patch in tessellation shader?
1
How does graphics api like OpenGL determine which triangle is back face to cull?
3
OpenGL task/mesh shader extension NV_mesh_shader not behaving as I expected
0
How to calculate vertex normals on a mesh with non-planar polygons
0
Bump mapping WITH precomputed tangents?