Suppose I have two solid spheres $s_1$ and $s_2$. We know their centres and radii, and we know that they have some overlapping volume in space.

We have a typical 3D graphics setup: assume eye is at the origin, and we are projecting the spheres onto a view plane at $z = f$ for some positive $f$. The spheres are beyond the view plane and don't intersect it.

Let $c$ be the circle in space that is points on the surface of both spheres, i.e. the visible (from some angles) 'join' of their overlapping volumes.

I want to calculate if any of $c$ is visible when projected onto our view plane. It might not be, if $s_1$ or $s_2$ get completely in the way.

Any ideas for approaching this?

Given that I didn't miss anything, you can probably cut this down to a problem in the 2D space. Viewing onto the plane defined by the center points of the spheres and your camera origin, the scene looks like this: 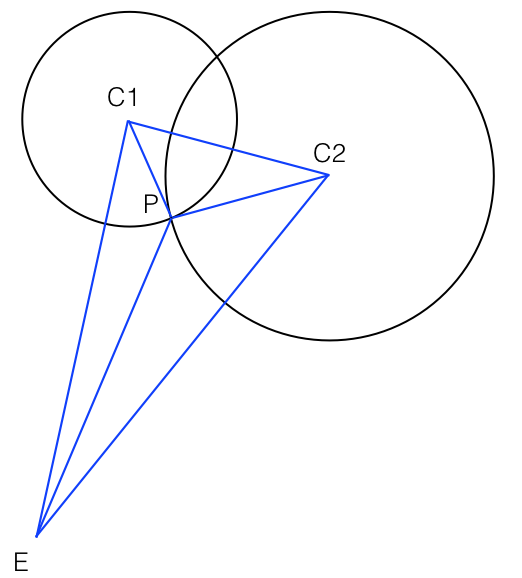 The spheres become circles with the center points $C_1$ and $C_2$, and the intersection circle is now only 2 points with only the closer one $P$ being interesting. The camera/eye is arbitrarily set to the point $E$.

Calculating if one point on the spheres is visible or not is easy: Simply check whether or not the angles at point $P$ between $E$ and $C_1$ respectively $E$ and $C_2$ are both greater (or equal to) 90 degree1. 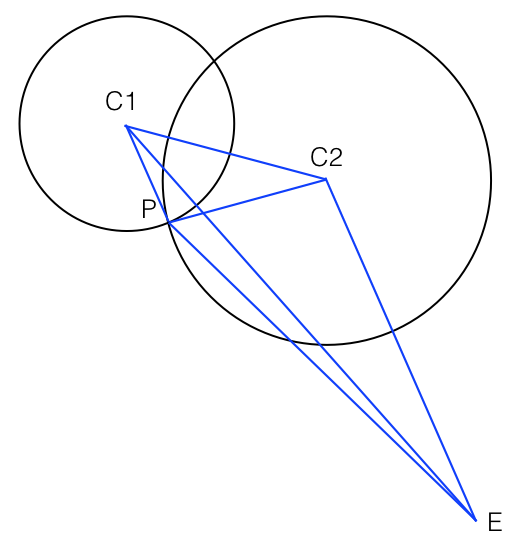 You can clearly see how that point is occluded by the circle around $C_2$ and that the angle between $E$ and $C_2$ in $P$ is less than 90 degree.

1 Having an angle of exactly 90 degree means that the line between $E$ and $P$ just touches the respective circle/sphere in point $P$ as a tangent.

Not the answer you're looking for? Browse other questions tagged raytracing 3d occlusion or ask your own question.

7
Am I missing something for ambient occlusion?
7
What is occlusion?
2
In Ray-Sphere intersection is $b=2*(O-C) \cdot dirv$?
4
Compute sphere tangent for normal mapping
0
Self intersection artifacts in 3D image raytracing
2
why doesn't a ray hitting a sphere at only 1 point count as a hit in sphere/ray intersection?
0
Perspective Raytracing
3
Math for adaptive supersampling for raytracing