I was reading this paper about Voxelpipe, a voxelization library from NVIDIA and I found on section 2 Voxelization the terms 6-separating and 26-separating

I found this website that tries to explain the basic ideas on voxelization but it wasn't very much helpful understanding the terms mentioned.

Can anybody explain or point out to some other resource that can help me understand?

The terms have to do with the "thickness" of the voxelization. I'll illustrate with the help of a diagram about 2D line rasterization (from this unrelated question). 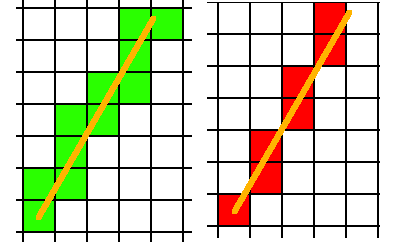 On the right is the typical line rasterization: the algorithm finds the one pixel nearest the line within each row (or column, depending on slope). This produces what we usually think of as a "1-pixel-thick" line. On the left is a conservative rasterization, which finds every pixel whose rectangle is touched by the line, and it produces a thicker line.

The "n-separating" terminology is a bit unfortunate, but here's what it's getting at. Imagine you're doing a 3D flood-fill in the voxel grid, but in the flood-fill you only look at the 6 direct neighbors of each voxel (±1 step along each axis). Then the "6-separating" (thin) voxelization will stop the flood-fill: it suffices to separate the two sides of the surface, if only 6 neighbors are considered. On the other hand, suppose your flood-fill was allowed to go to diagonal neighbors as well—26 neighbors in all (3×3×3 neighborhood of voxels). Then the 6-separating voxelization wouldn't stop the flood fill, but the 26-separating (thick) one would.