So how does glm's matrix works for my vulkan program just by correcting [1,1 location? Please do correct me if I am making some mistake in understanding the differences in matrix. 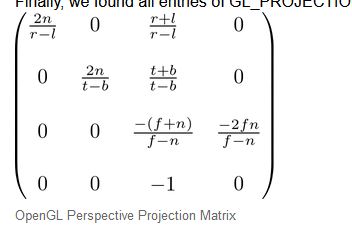 Note that there is a little extra info here to (hopefully) provide the info need to understand the answer at the end. Plus I don't know of any sources that give all the solution in one place....

As of Vulkan 1.1 negative values are allowed when setting up the viewport which gives a fairly natural solution to the same problem.

For the depth range: Vulkan has a [0, 1] range for the Z axis in NDC space where OpenGL has [-1, 1] range (by default). There are a couple ways to handle this. You can remap the OpenGL range to the Vulkan range fairly easily with:

Here is some code for generating a Vulkan friendly perspective matrix. Note that this code looks a lot simpler then what GLM uses because it expects a symmetric frustum. This is code is copied from the FGED website...mostly

(This solution does not flip the y-axis.)

Finally: A perspective matrix setup for OpenGL will work in Vulkan but it has limitations. The y axis will be flipped and objects falling in the [0,1] range will be visible. But objects falling in the [-1,0) range will not. Since Vulkan has a depth range of [0,1] it is easy to get the "illusion" that it is fully functional since the camera will appear to map correctly to the full depth range.

Not the answer you're looking for? Browse other questions tagged opengl mathematics vulkan or ask your own question.

62
Should new graphics programmers be learning Vulkan instead of OpenGL?
7
Why can't I utilize multiple CPU cores with OpenGL like Vulkan?
0
Vulkan: Swapchain image count with VK_PRESENT_MODE_FIFO_KHR
6
Vulkan: how does host coherence work?
2
How different is the SPIR-V accepted by OpenGL (ARB_gl_spirv) from SPIR-V accepted by Vulkan?
1
What is a "Vulkan Extension"?
2
Vulkan: using gl_PrimitiveID without geometryShader feature
0
DirectX FVF(Flexible Vertex Format ) equivalent in OpenGL/Vulkan?
1
how to change the near clipping plane of a perspective projection matrix for OpenGL